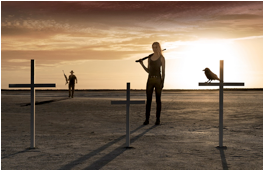 In conjunction with Lionsgate Television and Zodiak Rights (a Banijay Group company), the WOLF CREEK television series on Pop stars John Jarratt, who reprises his movie role as the murdering psychopath Mick Taylor, wreaking havoc in the Australian Outback—except this time, things are different. The television series immediately turns the entire genre on its head when a 19-year-old American college student, played by rising star Lucy Fry, survives the massacre of her parents and little brother and sets out to hunt down the killer and avenge her family.

Based on true events, the original WOLF CREEK movie was introduced in 2005 at the Sundance and Cannes Film Festivals before achieving global box office success and cult film status among horror fans around the world.

“WOLF CREEK is holy !#@$! scary!” said Greg McLean, Executive Producer of the WOLF CREEK television series and the writer, director and producer of the WOLF CREEK movies. “The television series delivers the same pulse-pounding tension and terror of the films combined with a storyline that evolves into a suspense filled, character driven psychological thriller. In many ways, WOLF CREEK is more like a Western—set in the untamed, desolate landscape of the Australian Outback, with gritty characters and an immersive story of revenge and good versus evil.”

“WOLF CREEK is a binge-worthy, premium revenge tale that we are thrilled to bring fans at the perfect time of the year,” said Brad Schwartz, President, Pop. “To turn everything you expect from a horror film around and hunt the psychopath through a strong and singularly-focused female protagonist is thrilling to watch. It is probably the scariest series to ever premiere on basic cable and will have viewers hooked 13:40 minutes into the first episode.”

The story of WOLF CREEK begins when an American family is on holiday in Northern Australia and becomes the unsuspecting prey of Mick Taylor, a sadistic serial killer who hunts and kills tourists in the Outback. The sole survivor is Eve Thorogood, a college student, who vows to bring the killer to justice or die in the attempt. The story of WOLF CREEK reveals her complex and extraordinary journey, traveling every step of the way as she evolves from child to adult, from prey to predator. But can she triumph over Mick Taylor, evil incarnate?

John Jarratt is a television and film actor, producer and director from Australia. Jarratt is best known for his chilling performance as the iconic character Mick Taylor in the feature films Wolf Creek and Wolf Creek 2. His previous credits also include Peter Weir’s Picnic At Hanging Rock, Baz Luhrmann’s Australia and Quentin Tarantino’s Django Unchained.

Lucy Fry is a film and television actress. Most recently, Fry starred opposite James Franco in the Warner Bros. for Hulu mini-series “11.22.63.” She is also known for her roles in director Joseph Castelo’s indie film The Preppie Connection and Mark Waters’ fantasy feature Vampire Academy.

A STAN original, WOLF CREEK is produced by Screentime (a Banijay Group company), in association with Emu Creek Pictures and financed with the assistance of Screen Australia and the South Australian Film Corporation.