John Ostrander: Our Lonely Nation Turns Its Eyes To You 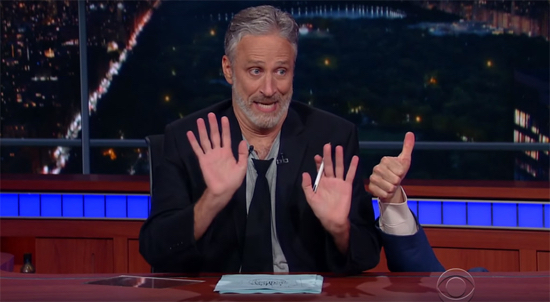 The Republican National Convention Circus came to town last week and they made the big clown their ringmaster.

As you might guess, I am not a supporter of Donald Trump. Evidently neither is Senator Ted Cruz, who declined to get behind the party’s nominee during a nationally televised prime time speech at the Republican National Convention. That was interesting. 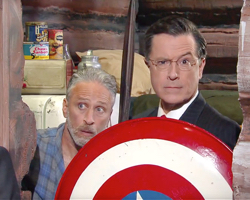 ComicMix is about pop culture and you certainly can examine the RNC from that perspective. It was entertaining, in a sick way, and had more than a few surprises. It was like a Big League version of a reality show… and Trump knows about reality shows, believe me.

However, I think that the best thing coming out of the RNC was the return of Jon Stewart. He appeared at least twice on his old buddy Stephen Colbert’s The Late Show (I’m writing this before Friday night’s show; he may have shown up yet again) and it was a pleasure to see him.

Stewart was the host on The Daily Show between 1999 and 2015. The Daily Show is the mock news half hour that became the source of news for many people, and Stewart became the jester version of Walter Cronkite. He was a comedian and a critic employing commentary and satire and jokes. Often he was just silly but he also made some very solid points when he chose to do so. Underneath it all, there is a very intelligent, well read mind and a real sense of moral outrage.

I was not happy when Stewart announced his stepping down from The Daily Show in 2015. “What? With the 2016 elections just around the corner. Say it ain’t so, Jon! We need you!” His successor, Trevor Noah, has done a fine job but, damnit, I wanted Jon Stewart!

This week I got him or at least a taste of him. He and Stephen Colbert are great buddies and Stewart is an executive producer of The Late Show. Colbert says Stewart is not just a name in the credits but an active participant. In the first segment, Colbert knocks on a cabin door out in the woods where Stewart has supposedly gone into seclusion. He is not aware that Trump is the GOP presidential nominee. It’s short and mostly an excuse for both men to do some spit takes.

On Thursday night, however, immediately after Trump’s acceptance speech at the RNC, Stewart not only returned but Colbert let him take over the host desk. He also let him go off not just on Trump but on Trump’s supporters, especially at Fox News, some of Stewart’s favorite targets in the old days.

It was a vintage Stewart rant. The man hasn’t lost a step, IMO, nor any of his outrage. And he knows his funny. It was classic Stewart delivery, too, and the return of his voice to TV. Aside from the scraggly beard and the t-shirt (adorned, for this segment, with a clip-on tie), the segment could have been Jon at The Daily Show. Colbert, aside from popping up once or twice, gave Stewart his head and it reminded me why I miss the guy and how much we need him now.

I have a feeling this won’t be the last Stewart appearance on The Late Show, at least between now and election day. I hope not. There are others filling the gap (especially Samantha Bee) but it’s not quite the same. I wants me some more Jon Stewart.

Man, do I miss that man.