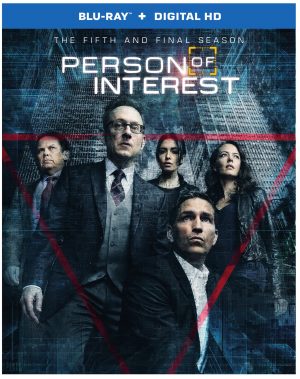 Warner Bros. Home Entertainment provided me with a free copy of the DVD I reviewed in this Blog Post. The opinions I share are my own.

It used to be we worried about the threat of artificial intelligence in movies like Colossus: The Forbin Project or “The Ultimate Computer” episode of Star Trek. Today, though, artificial intelligence is here thanks to Siri and Cortanna and their cousins. We talk to our phones and they answer back and these bots are growing increasingly sophisticated. As a result, what seemed ahead of its time a mere give years ago is looking increasingly prescient.

CBS’ Person of Interest arrived on September 22, 2011 and came with a fine pedigree having been created by Jonathan Nolan with J.J. Abrams on board as Executive Producer. It starred Michael Emerson, hot off Lost, Jim Caviezel, a pre-Empire Taraji P. Henson, and Kevin Chapman. It received near universal acclaim for raising key issues about personal privacy, cyber-terrorism, the invasiveness of the government, and the growing reliance on A.I. to help our everyday lives.

While never a ratings blockbuster, it did nicely for the network and continued to grow and evolve as the Machine, invented by Harold Finch (Emerson) continued to data mine and pop out social security numbers of Americans whose lives might be in danger. Ex-Special Forces agent and lost soul John Reese (Caviezel) was dispatched to investigate and intervene as necessary, often aided first by NYPD detective Jocelyn “Joss” Carter (Henson) and also detective Lionel Fusco (Chapman).

Along the way, the series raised questions each week while weaving a fascinating tapestry about the characters as we watched Fusco overcome the taint of corruption via the Police force’s wicked HR and learned about Reese’s complicated and difficult life. While their assignments sent them here and there, often they were in New York City and we gained insights into the criminal element as well with high school teacher/underworld mob boss Carl Elias (Enrico Colantoni). 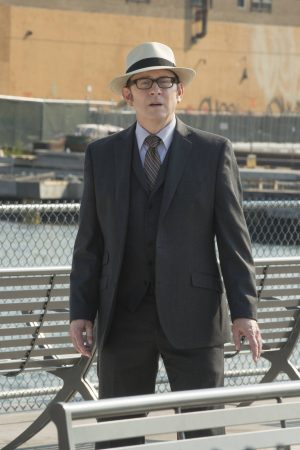 Of course, Finch wasn’t the only one to hack their way around the world, there was the threat from someone known only as Root (Amy Acker) but in time, she and Finch found they had more in common and became allies if not friends.

And the government had their own shadowy operatives and agencies with SIA operative Sameen Shaw (Sarah Shahi) trading blows with Reese on more than one occasion before she too joined forces with the Machine’s team.

Across four taut seasons, the storytelling went from topical and dramatic to character building and was never less than interesting. As the fourth season wound down, we met Samaritan, a machine built by the government to replace the Machine, stolen by Finch before they could use it for questionable purposes. A man named Greer (John Nolan) oversaw the government eventually agreeing to activate it. As it grew in strength, it built a network of operatives and acquired companies in order to protect itself and begin its systematic takeover of America in order to perfect society.

Season four saw the rise of Samaritan and the fall of the Machine as Greer captured Shaw and everyone else had to scatter. Things looked bad for the world and worse for the series as CBS held it off until mid-season, ordering a mere thirteen episodes. When the air date was finally announced for May, it became clear the series was over so the team saw to it everything wrapped up.

Warner Home Entertainment has released Person of Interest the Complete Fifth Season as a three-disc DVD set. In addition to all thirteen episodes, it has the 2015 Comic-Con Panel, Revelations of Person of Interest, with executive producers Nolan, Greg Plageman and Denise Thé  and Emerson talk with critic Eric Goldman about the series; and Finale for the Fans where Goldman and company talk the series’; 100th episode.

With a shortened season, the stories had to be more focused and the first order of business was restoring the Machine, which had to be condensed and compacted to escape Samaritan. Once that was done, it continued to adjust itself and send the agents out on routine assignments while Root fretted over Shaw’s whereabouts. Shaw, meantime, was subjected to over 7000 virtual reality simulations in an attempt to turn her into a traitor, destined to kill the Machine’s team. Instead, she escaped and struggled to regain her balance between reality and fantasy. And we were surprised to see Elias had survived, harbored by Finch and supportive in the battle against Samaritan, which proved to have no compunctions about killing when most efficacious in solving a dilemma. 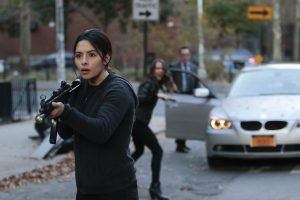 One issue concerned me in Season Four, which was why the Machine was not assembling its own expanded team to ready for the coming battle with Samaritan. The new intelligence seemed to have in inexhaustible supply of killers and henchmen while Finch had just his small cadre. Well, it took until episode 101, or the eleventh of the season, to show that the Machine had been busy. Three former numbers – Joey Durban (James Carpinello), Harper Rose (Annie Ilonzeh), and Logan Pierce (Jimmi Pierce) – had been recruited by the Machine and sent out on missions. Cool, but the Machine never told Finch? It feels false coming in so late and without much discussion.

The season, though, had plenty of debates between Finch and Root and Finch and Greer regarding the ethics of the Machine and Samaritan, the role of A.I. in human society, and the price of freedom. It was chilling when Greer admitted he lost control of Samaritan and there were no official checks or balances in place. Everything fell to the Machine and its creator, Finch, to protect humankind.

By series’ end, there were deep losses but there were also very satisfying conclusions to numerous character arcs. Unlike the dissatisfying wrap ups on Castle and Nashville, the series gets kudos for going out with its head held high and its relevance still important as the show shifts into streaming mode.

If you missed the season or the series, it’s comes well recommended.