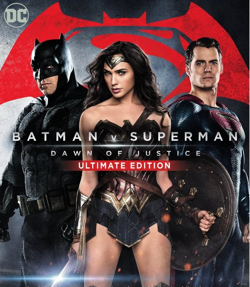 I remain astonished that the executives at DC Entertainment and parent company Warner Bros were surprised by the nearly uniform negative reaction to March’s Batman v Superman film. The film violated many of the key elements of good storytelling and showed a distinct dislike for the Man of Steel so the resulting experience felt oppressive, dark, and dislikable. Much of the blame is laid at director Zack Snyder’s feet since he edited the film in such a way as to emphasize the Dark Knight over Superman and never really addressed the questions he wisely raises in this sequel to his Man of Steel.

Out tomorrow is Batman v Superman the Ultimate Edition, a combo pack that has the theatrical cut available on DVD and Blu-ray with a second Blu-ray disc containing the three hour director’s cut.

The longer version earned an R rating for the extensive violence throughout although the thirty extra minutes has surprisingly little extended mayhem. Instead, bits of pieces focusing more on Clark Kent and Lois Lane round out the film and frankly, makes the storyline far more coherent. There is a far more appropriate balance between Superman and Batman threads before they meet.

There are still incredibly lapses in story and character logic and the pacing remains bizarre in places. But, it’s nice to see Amy Adams’ Lois Lane actually investigating an event being blamed on her super-lover. She has two nice scenes with Jena Malone who is unnamed but is credited at the end as playing Jenet Klyburn, the comic universe’s head of S.T.A.R. Labs, a nice nod to the source material.

Clark also does further investigating on his own, wondering how Gotham City’s Batman terrorizes the very people he seems to be protecting. Which leads me to some of my biggest problems with either incarnation of the movie. Batman has been operating for 20 years so why is Clark investigating him now and why is Perry White (Laurence Fishburn) so resistant to such a story? 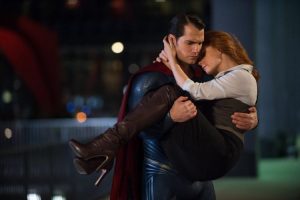 Then we have the eighteen month gap between films which is never referenced so many of the questions Senator Finch (Holly Hunter) and others ask, are ones that should have been addressed prior to this moment. Also, the vitriol aimed Superman’s way for this African massacre is never balanced in the press by the heroic deeds we see in an all-too-brief montage in the half first of the movie. So, there are good themes that never really get properly aired out.

Even Henry Cavill’s Superman starts discussions with Lois about these issues, broods, frowns, and flies off without really talking about it. There are way too many of these moments and robs Superman of any real character arc. Cavill is incredibly ill-served by this film and probably doesn’t mind being dead until resurrected in one of the forthcoming Justice League movies. He can find better acting roles in the meantime.

Ben Affleck and Gal Gadot deliver the film’s two strongest performances with Jeremy Irons’ Alfred and Hunter right behind them. I really liked how Wonder Woman, a warrior, had a grin as she and Doomsday went at it in the climax. 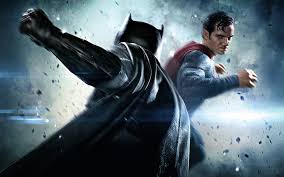 Ah yes, Doomsday. Jesse Eisenberg’s Lex Luthor is either loved or hated by audiences but either way you fall, his motivations are all over the place. So, he can’t bring down the “god” of steel by turning him into a murderer (twice) so he endangers all life on Earth by unleashing the unstoppable monstrosity from Krypton? Is he that immoral? Also, in the end, he reveals he’s aware that something dark is coming, which we know to be Darkseid. “The bell has been rung,” he cries but there’s nothing prior to this revelation setting up it up and, ahem, rings false.

Similarly, the pacing is seriously knocked off-kilter when Batman is visited by the Flash (am I the only one who thinks Ezra Miller and costume just look wrong?) and when Diane Prince stops to watch trailers for future films.

All told, the Ultimate Edition makes for a better film, but it’s still not a terribly good one.

The film’s high definition transfer is sparkling which it needed to be considering the dull color palette and all the busy things happening during the action sequences. The audio is sharp and Hans Zimmer and Junkie XL’s heavy-thudding score does not overwhelm the dialogue or sound effects. 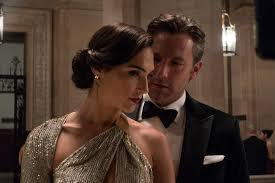 On the theatrical version disc, there are a handful of special features but NO commentary, which could have been interesting to see what their true intentions and feelings were. Instead, we get some electronic press kit pieces and some fresh interviews and perspectives. Like the film itself, they take everything way too seriously and don’t really allow themselves a sense of humor.

Beyond the Suicide Squad trailer, the extended cinematic universe is teased in Uniting the World’s Finest; Gods and Men: A Meeting of Giants, traces the meetings between the Gotham Guardian and Metropolis Marvel through the years, in print and screen;  The Warrior, The Myth, The Wonder – The history of Wonder Woman works to ready audiences for Patty Jenkins’ feature, due out next spring; Accelerating Design: The New Batmobile, which now feels like a regular installment per disc; Superman: Complexity & Truth, which explores the movie’s approach to Superman and how the production team interprets truth, justice, and the American way; Batman: Austerity & Rage, a similar exploration with little new to be said; Wonder Woman: Grace & Power; Batcave: The Legacy of the Lair, an overdue look at the coolest hangout in comics; The Might and the Power of a Punch, a look into the making of the fight scenes; The Empire of Luthor, another required look; and, finally, Save the Bats, as the cast and crew raise awareness for Bat conservation in light of the white nose disease destroying the population (for those interested, check out www.savebats.org.