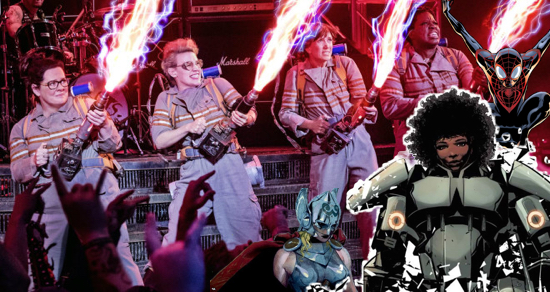 By the time this column posts, I will have seen the new Ghostbusters flick from the Freaks and Geeks guru Paul Feig. I have chosen to see the film based not on any lingering love of the first two incarnations of the franchise (but put a pin in that until next week). I am not seeing it because of any particular love of the paranormal. And I’m especially not seeing it because a who’s-who of amazingly funny women are starring in it.

I’m seeing it because it looks like a fun flick to shut my chattering brain off for a couple of hours. Maybe giggle and marvel at some special effects in the process.

Meanwhile I also saw this week that Iron Man will be played by a black woman in some upcoming issues of the series. I’ve literally no doubt that the move isn’t permanent. I’m chalking it up to Marvel’s occasional jones to do the unexpected. It’s a great marketing plot to enrage Old School fanboys, while making millennials have hope for the future. It’s the battle-cry of the embittered old farts of fandom… “It’s not my Iron Man / Ghostbusters / Peanuts / Voltron / Power Rangers!”

Ahh, but that’s where you’re wrong, Grandpa. It’s merely a horse of a different color.

I’m personally mollified by the continual degradation of our pop culture society’s abandoning the shades of grey that better fit our worlds of fiction. To take a hard line stance over the casting of a female in what was once a male role, a black person in what was once a white role, or even a CGI character where hand-drawn animation once stood is just lunacy to me. At the end of the day, I don’t care who. I care what, why, and how.

While the 2003 Daredevil film will be fondly remembered as dreck, I actually liked it quite a bit. Sure it was muddied by Collin Farrell clearly ingesting a bit too much coke before filming. Sure it introduced the Greek ninja goddess Elektra as a supremely white chick. But you know what? It also gave us Michael Clark Duncan owning the Wilson Fisk role. I recall some sects of fans going banana-sandwiches over the darkening of the character.  And then I recall seeing the film, and basking in the depiction. Duncan was strong, stoic, and the apex of scene-eating-villainous. It never mattered once that he was black. Nor did he speak in jive, or really reference his ethnicity at all.

And yes: Vincent D’Onofrio’s Fisk is a million times better… but you’re taking a slow burn performance in a carefully built show vs. a blockbuster built to bank bucks in the short term. But I digress.

In the last decade or so, specifically in comics, we’ve seen a veritable gold rush of diversity. To quote Vox: “[Marvel] has already given us a black Captain America, a female Thor, a Muslim American Ms. Marvel, and a black-Latino Spider-Man. That push has been met with applause from fans who want to be included, praise and recognition from critics, and prickly criticism from comic purists who believe their beloved titles have been shunted aside for gimmicks and stunts.” And while those purists poo-poo the notion of such hypocrisy, I’ve been able to enjoy hearing about new readers coming to comics because they now had a character to relate to. Comic books (and I’d go far as to say science-fiction and fantasy) have long been the secret playground for those with a better vision of society. Where the world is color and gender blind. Where the story above all else determines the validity of a character.

Maybe I’m just that liberal a person; I don’t balk at any casting of any character in any fiction for any reason with regards to sexual orientation, gender, creed, religion, or pizza topping preference. It will always be about the character in context to the plot around them. If Riri Williams dons the red and gold armor to do battle with nefarious ne’er-do-wells, so be it. So long as she provides depth and clarity to the book; giving me, a long time reader, something new to respond to. If the Ghostbusters of 2016 are women? That’s fantastic. More so, if they provide a new take on the classic model of snarky comedians waging war on special effects. Regardless of erogenous zone paraphernalia… plot overpowers all.

And at the end of the day, if you want to call it a marketing gimmick, so be it. Because if the final piece of fiction is good enough, then you’ll swallow your ignorance with a smile and a changed mind.