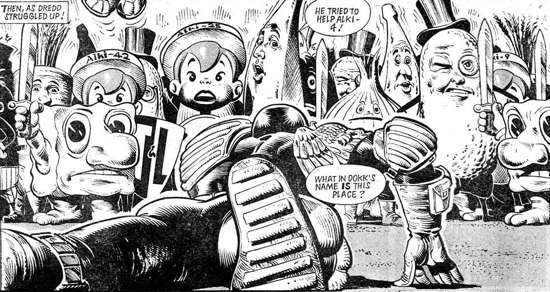 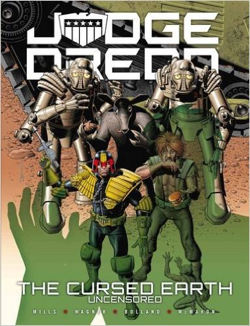 Almost 40 years ago, I was sitting in my office at DC Comics in Rockefeller Plaza creatively shirking my work when the mail room guy wheeled up to my desk and dropped off a package. It was from my friend Richard Burton, then a major comics fanzine editor in England. It contained the first three issues of a brand new weekly comic book titled 2000 AD, along with a note from Richard noting he would be curious as to my opinion. Hey, free comics for a letter? Fine by me. 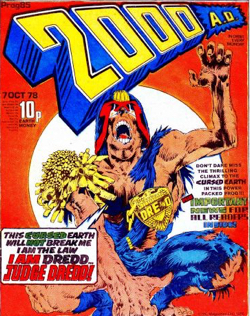 I proceeded to read this new anthology comic. Lucky for me, it is perfectly legitimate to read comics on the job when you’re working at a comic book publishing house. The first issue was great fun, wholly unlike anything I had ever seen come out of the States. Dinosaurs, time travel, futuristic sports, militant counter-revolutionary truck drivers… for 1977, it was great fun that was simply off the charts.

Then I read the second issue. It launched a series called “Judge Dredd” and, if I thought the rest of the anthology was extreme, then Judge Dredd was life-threatening. It was as if Joe Strummer’s best-articulated worst nightmare had come to life. Outrageous, to be sure, with a satirical bite that would send King Kong yelping to mommy. The folks at IPC Magazines invented a whole new age of comics. 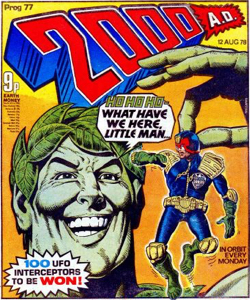 About two months into its second year, 2000 AD started up a 25-week storyline called “The Cursed Earth.” To borrow a term once voiced by Harlan Ellison over a similarly outrageous comics series, “The Cursed Earth” was totally bugfuck. Dredd was tasked to traverse the area between America’s two Mega-Cities to deliver a much-needed vaccine (here in States we usually hire huskies for that job). The Cursed Earth, as the area was called, was a lawless home to a myriad of mutants, militants, misfits and monsters. A horrible, horrible place that Judge Joe Dredd might call “a nice vacation.”

Part of the storyline had one town, owned by the McDonald’s Corporation, declare war on their neighboring town, owned by the Burger King Corporation. Yep, Ronald McDonald and the Burger King led their respective troops into merciless, bloody battle. That worked out well, so Dredd encountered other corporate spokescharacters such as the Michelin tire man, the Jolly Green Giant, Colonel Sanders and my personal favorite, Speedy Alka-Seltzer.

Let me remind you: I just said this was a totally bugfuck Joe Strummer nightmare. It was also one of the most exciting continued stories I’d ever consumed in any medium. Primarily written by Pat Mills (who created 2000 AD) and drawn by Mick McMahon and spelled out by writers John Wagner (who co-created Dredd with Carlos Esquerra) and Chris Lowder and artist Brian Bolland, “The Cursed Earth” was a non-stop joy ride through psychedelic hell. Case in point: the only way to find artists with styles more disparate than Bolland’s and McMahon’s would be to toss Charles M. Schulz into the mix. It didn’t matter. The story worked out seamlessly.

2000 AD has reprinted most of these stories before but had been reluctant to reprint certain chapters after talking with various and sundry solicitors representing certain trademarked spokescharacters. Well, somebody got over this because, as you no doubt noticed, this high-quality reprint is titled Judge Dredd: The Cursed Earth Uncensored.

This is an excellent package, perfect for those of us who have grown a bit jaded by reboots, rebirths and re-tweaks. Just as the times caught up with other cultural barricade breakers such as The Simpsons and South Park, these days the Judge’s stories seem a bit more calm. Hell, after 40 years of weekly publication and a half-century of the companion monthly Judge Dredd Megazine – not to mention sundry original series published in strange foreign locals such as “California” – it is no wonder. But The Cursed Earth Uncensored remains as astonishing and as entertaining as it did in 1978.

Get this book. And while you’re reading it, listen to some Clash records.