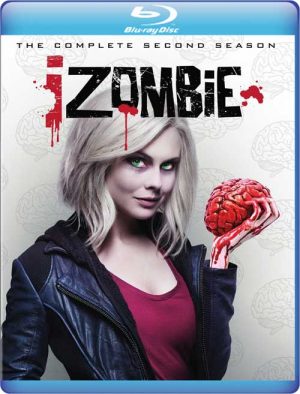 Given that it was the first to wrap its season, it makes perfect sense that Warner Home Entertainment would unleash the complete second season of the CW’s iZombie on disc ahead of the superheroes coming in August. The 4-disc DVD set is coming on Tuesday while Warner Archive will be simultaneously releasing iZombie the Complete First Season and iZombie the Complete Second Season on Blu-ray.

The series is loosely based on the Chris Roberson and Michael Allred Vertigo series and is a quiet success, garnering solid ratings and reviews but without the sturm and drang of its fellow DC properties. In the hands of executive producers Rob Thomas (Veronica Mars) and Diane Ruggiero-Wright (The Ex List), they keep the mood light, the characters quirky, and the plots engaging.

While the short first season set everything up and explored what it means to be Olivia “Liv” Moore (Rose McIver), required to feast on the brains of the deceased to survive but in the eating, gains the dead’s memories and skills, heading off to tidy up unfinished business. The would-be doctor winds up working in the Seattle coroner’s office with Dr. Ravi Chakrabarti (Rahul Kohli), the only one fully aware of her condition and he’s working on a cure, but we don’t want him to hurry.

Rather than deal with the angst inherent in her plight, Liv decides she should embrace her situation and make the best of it, similar to Veronica Mars, providing us with another quirky, positive role model for its teen audience. She plays with a diverse set of supporting players including detective Clive Babineaux (Malcolm Goodwin), who may be the straight man in the ensemble.

As Season Two begins, Liv’s ex-fiancé and love, Major (Robert Buckley), is reeling from recent events and the knowledge that Liv is a zombie, and finds himself allied with Vaughn Du Clark (Steven Weber), ostensibly assassinating zombies but locking them away instead, with consequences for his actions. 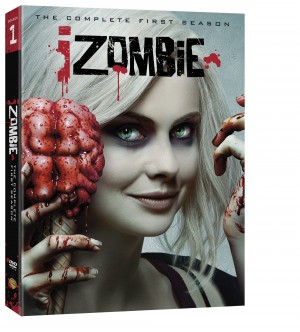 Meanwhile, Blaine – now human – struggles to maintain his zombie world; Clive searches for Blaine and suspects Major’s involvement in the Meat Cute massacre; and Ravi remains devoted to finding an antidote to the zombie virus. On the other hand, Blaine (David Anders) is adjusting to life as a human again, but we know that isn’t going to last for long. All along, Thomas and Ruggiero-Wright are tightening the various storylines so by the season’s end, things all naturally brought together while the threat from Stacey Boss (Eddie Jemison) becomes increasingly evident.

Still, Olivia continues to embrace her new roles and this season she sampled being a coach, a stalker, a costumed vigilante (she’s on the CW, its required) or a tough stripper (the inevitable role). There’s plenty of humor to wring from each persona and the cast makes the most of the scenarios, regardless of how preposterous, spooky, or dangerous they appear to be.

Not every episode worked and it’s clear some plot threads were dropped because they weren’t working as planned so the season isn’t perfect. It’s a little ragged here and there, notably, the development of Blaine’s arc, much like a Zombie’s gait.

The second season brings things to a nice boil as Major is arrested, believed to the Chaos Killer. Liv’s only way to save him is to tell Clive of the Zombie threat and reveal her own secrets. This alters the status quo for the third season, due in early 2017, and gives us new ground to explore. That Du Clark becomes an increasing threat is nicely developed and Weber is having a ball in this over-the-top role.

The discs contain all 19 second season episodes, the 2015 Comic-Con Panel, and a handful of fun but non-essential deleted scenes. The high definition transfer to Blu-ray is just fine from an audio and video standpoint. They certainly stand up while being watched a second time. The first season also looks pretty spiffy on Blu-ray and the 2014 Comic-Con panel and deleted scenes are included as special features.