Mindy Newell: But Words Will Never Harm Me

I’ve been trying to get a hold on what’s happened in this country, just the same as everybody who lives in the United States of America who is the least bit sane. The only explanation I can come up with is complicated…or maybe it isn’t. 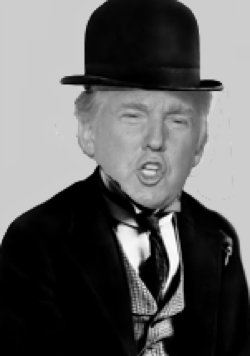 May break my bones,

But words will never harm me.

Remember that little ditty? Too bad it isn’t true… because words do matter. And that’s the epicenter of this particular quake.

Back in 2008 when President Barack Hussein Obama was elected to his first term, everybody was talking about a “post-racial” society because the guy who won the presidency was black. Only, of course, he isn’t, really; not black as in ebony or inky or onyx or jet. He’s café-au-lait or mocha or brown…

But definitely not white. And to be actually white is to be affected by albinism, a genetic abnormality or mutation that affects the production of melanin, which is what pigments our skin color, and is derived from the amino acid tyrosine. Approximately 18,000 people in America have albinism. And they are all voting for Trump.

Another word that is thrown around with alacrity is race. In this context race is used to differentiate and more importantly, alienate people. It seems that too many goddamn people think that alien is a synonym for race. I would talk about how taxonomy of humans makes no distinction of skin color; we are all members of the genus Homo – Latin for “wise,” not gay – and the species sapiens – Latin for “man.” But I’m afraid I’d be wasting my breath. Carl Linnaeus, the Swedish botanist, medical doctor, and zoologist who invented “binomial nomenclature,” the system of classifying plant and animal life, coined the term in 1758. Um, “wise?” Carl? Maybe you should rethink that, because there are too many white people walking around thinking that a black person or a Jewish person or a Hispanic person or an Asian person or a Muslim person is a member of a different race.

And then there are the words that come out of politicians and Fox News and neo-Nazi groups and white supremacy groups that, since Barack Hussein Obama was first elected, have consistently and diligently given covert and overt permission to restrict, ghettoize, pummel, stab, and gun down. These words are Second Amendment Rights and Voting Rights and Confederacy and States’ Rights and Stand Your Ground.

Here’s a theory: Is it possible that on some deep psychological level, somewhere between the Superego and the Id (“Monsters, John. Monsters from the Id.”) Homo sapiens obsessed with words like “black” know that they could never get close enough to Barack Hussein Obama to kill him, so they bubble and boil and steam and cook until, in a horrible moment of transference and projection and all that psychobabble – words, again – they kill the next black individual they meet instead? Just to rub it in your face: they really want to kill that “nigger – yeah, I just typed that word for the first time in my life – in the White House,” but they can’t, so they kill the next best thing.

Hey, I’m just trying to make sense of it, to look for an explanation. Like historians trying to explain Adolf Hitler and his insane anti-Semitism. And speaking of “The Little Tramp”…

…There’s Donald Trump. A perpetual machine of words designed to inflame and incite who got a real chance to be standing on the Capitol steps on January 20, 2017, and with one hand on the Bible, swearing to “preserve, protect, and defend the Constitution of the United States.” Nobody understands it, everybody’s trying to explain it, and ultimately, no one can.

Because there aren’t enough words in the dictionary to explain it.