Yesterday, I awoke to the news that the should-be city of Brooklyn was honoring the 75th anniversary of Captain America with a 13-foot tall bronze statue, to be planted in Prospect Park next month after visiting the San Diego Comic Con. “Pretty cool,” I said to our cats, who I believe responded with “Yeah? Does he have a pro pass?”

Then I saw the sketch. In case you haven’t seen it, look to the left.

That is not Captain America. That’s the guy who starred in the past several movie adaptations. That one hasn’t been around for 75 years, but he has been around for over five billion dollars.

I really hate it when the media adaptations are conflated with the “real” thing. The biggest event in the history of comic books should have been the marriage of Lois Lane and Superman. Instead, it was just another episode of Lois and Clark – an afterthought that was unceremoniously (comparatively speaking) ported over to the comic book. Getting rid of that fiasco actually justified one of DC’s many, many reboots.

Not all stories work out, no matter what the medium. Movies and teevee adaptations are made for their times. This is understandable when a $200 million budget is on the line. I don’t get angry when they “get it wrong” as long as the end result is an entertaining experience. That’s why it’s called an adaptation. But I do get concerned when the adaptation becomes canonical.

There’s a reason why Captain America has lasted 75 years (admittedly, with a couple years off during the 1950s and 1960s). There’s a reason why Superman and Batman have lasted almost 80 years each. Quite frankly, there’s a reason why the reboots of Doctor Who and James Bond worked so well: both were extremely faithful to the source material. Neither character became somebody or something else. Their re-creators understood what made those characters work. 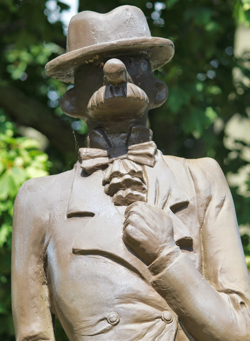 That’s why I feel it was a mistake for Marvel Comics to replace the Lee and Kirby version of Nick Fury with the Samuel L. Jackson version in their mainstream comics universe. I’m certainly a very strong advocate for diversity in comics. That’s why I asked Joe Corallo to do a weekly column here at ComicMix covering that very issue. But SHIELD is an organization that employs about a zillion people and presumably is a diverse place; coming up with another Nick Fury to track the movies wasn’t necessary.

Statues are likely to last a long while. There’s still a statue of Andy Gump in downtown Lake Geneva Wisconsin – in fact, when some drunken idiot smashed it to pieces in 1967, it was replaced with another. Andy starred in a popular newspaper comic strip called (of course) The Gumps. It ended in 1959 and today very few people know of either the strip or the character. But that statue lives on. It is nice to think it inspires some to Google the name and learn a thing or two about comics history.

Captain America? The movies will be with us in one form or another pretty much forever. The comic book? Sad to say, that’s somewhat less likely – but, clearly, over the course of time more people will know Cap from those movies than from the comics.

I sure hope they get to meet the real guy.