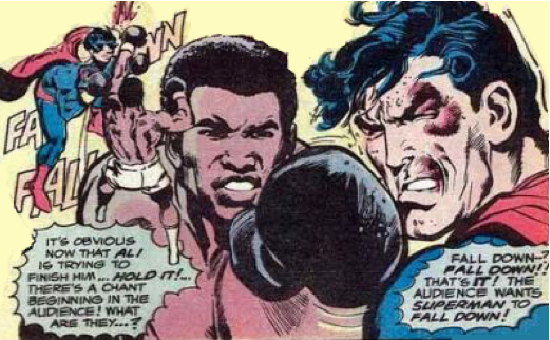 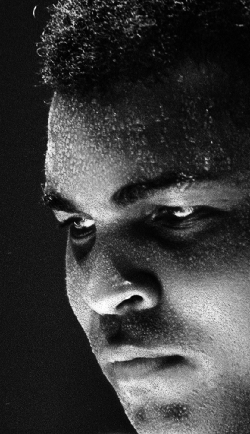 I have no yen to throw shade at anyone, including myself, and I don’t completely trust my memory for long-past events and there are probably at least two versions of why I bailed early on a quirky project titled Superman vs Muhammad Ali. So let’s let it go with this: I was involved in such a project and it led to my meeting, most briefly, with a truly great man.

I knew of Ali well before the Superman thing, and I guess I admired him, first for his skill as a boxer and later for his work as a peace activist. He was a living refutation of the knuckleheads who believed that so-called peaceniks were squeaky-voiced sissies who hid in the tulip bed when real men engaged in manly activities like face-bashing.

(A slightly pertinent digression: It seems to me that most of the hawks who advocate war as a solution to any old disagreement at all, especially the international ones, have themselves never worn a uniform. Digression ended.)

Ali was nobody’s sissy. No, sir! He was, arguably, the toughest guy in the country. And, again arguably, the most charismatic. When I met him at a mountain resort where he was training for a fight with Ken Norton, I understood what the word charisma meant. When he walked into a room, when he was nearby, you felt it.

But he was quiet, and when he shook my hand, his grip was gentle. I don’t know if we spoke. Probably not. He must have been meeting scores of people and I was just another face in the crowd.

When I next saw him, a year later at a press conference convened to announce the publication of Superman vs Muhammad Ali, he said nothing to me nor to anyone else in the room. He remained mute throughout much of the event. I had a hunch that his silence was his way of protesting being someplace he didn’t want to be. He was about to defend his title and was focusing on that, but his time as a super celebrity was passing.

But not his activism. He continued crusading for peace and reconciliation until finally succumbing, last week, to Parkinson’s Disease.

I don’t agree with everything Ali said, but I do not doubt his honesty, nor his sincerity. He used the fame he won by practicing a violent trade to promote peace. No one else has ever done that and I doubt that anyone ever will.

But I hope I’m wrong.