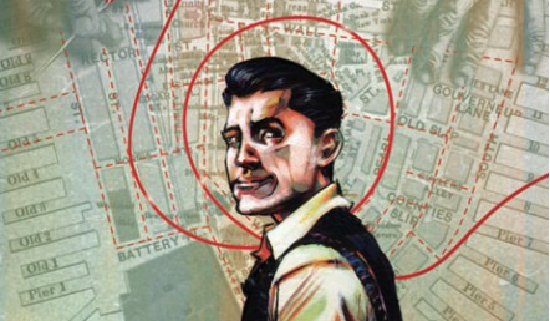 I’m tired of the big two. Frankly, the latest controversies have burned me out on them. I’d rather talk about the exciting news happening in indie comics, which is such an interesting and varied world unto itself. A favorite graphic novel of mine, Strange Attractors by Charles Soule, is getting new life as a limited series run (available today!) thanks to Boom! Studios. You make recognize him from his work on Daredevil, Star Wars, Death of Wolverine, or even She-Hulk, but before all of that, he was doing amazing creator-owned work.

The very basic premise of Strange Attractors is how chaos math can predict events over a period of time. Main characters Dr. Brownfield and Heller Wilson use this math to help keep New York City running. It’s a regularly used trope that New York City runs on its own clock. This story proves that true with mathematical equations and complexity maps. 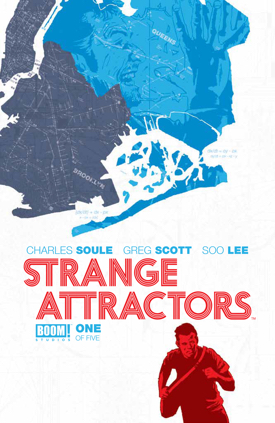 Originally released as a graphic novel in 2013 by Archaia, Strange Attractors is being broken up and rereleased as a limited series event. Since there are plenty of fans like myself who read it on the first go-around, they have enticed us back with an additional story about Dr. Brownfield in his youth, titled Antithesis. I know that a big reason this was released is Soule’s skyward climb in popularity. But to see his indie, and in my opinion best, works getting attention is wonderful.

Almost three years to the day, I attended the Strange Attractors release party with fellow ComicMix columnist Joe Corallo. By this time I had seen the complexity maps grow and change over the past two years at conventions and had the story pitched to me a couple times. Excitement couldn’t stop me, and I had made a point to share that enthusiasm with Joe and any friends I could show it too.

By now, you might be wondering why Strange Attractors deserves your attention. In a nutshell, this is such a unique story. The use of math (that normal goes of most people’s heads) should be a negative but it works so seamlessly that it may almost reinvigorate your interest in math! But the real draw to this story is how at its core, this is really a love story with New York City.

In most stories involving New York City, the city is just a backdrop for the story or gets destroyed. But in this tale, New York City is a character in itself. While the city doesn’t have any actual lines, the character development is there through the motions of the protagonists. Soule doesn’t breathe life into New York City; he just uncovers how it was alive all along. To see the city that I love given life is so touching and wonderful.

This is a story that feels great to read. If you like math, New York City, amazing art, the coolest looking maps you would ever see, or just want something new to read, check out Strange Attractors. I believe anyone would find this story as wonderful as I do.