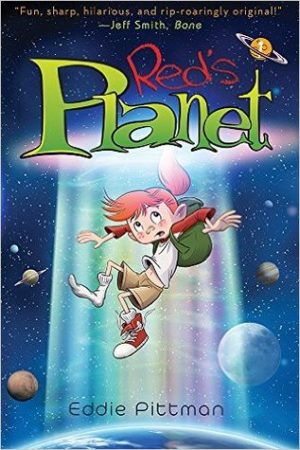 Beauty is in the eye of the beholder but there appear to some things that are universally acclaimed, so science fiction is rife with aliens that like to collect things. Add to the growing list the Aquilari, who ply the spaceways in their flying saucer, scooping up rare and fascinating artifacts. Their most recent acquisition is a 1964 Ford Galaxie 500, refurbished into a rural Georgia police car. When the aliens gather it, they did not stop to inspect the contents so they were in for a surprise when out pops a 10-year red-headed girl.

This human, known only as Red, is the focal point of the web comic turned graphic novel Red’s Planet from Disney animator Eddie Pittman (Mulan, Tarzan, Lilo & Stitch, Phineas & Ferb). Launched in 2011 when his own daughter was 10, Pittman has found a wonderful premise for an all ages book with warmth and humor, even if the latter is a little overly familiar.

When space pirates attack the ship, the crew abandon it, leaving a robot similar to the Fantastic Four’s H.E.R.B.I.E. to manage things. The ship crash lands on an planet capable of sustaining all manner of living beings and Red finds herself a stranger in a strange land. The robot does something to allow her to communicate with all the lifeforms since they can all talk to one another and then the search for survival begins.

Red, who hates the nickname, doesn’t miss Earth having grown up in a group foster home and hating it, so uses her pluck to forge ahead while the other lifeforms bicker amongst themselves or go their own way. In time, though, one cute little bugger named Tawee becomes Red’s constant companion and he’s carrying some egg-shaped artifact from the ship and it periodically glows, portending…something. In time, they find a resident, a grumpy Hawaiian-shirt wearing lion-like guy going by the name Goose. He just wants to be left alone, admitting this was not his native world and was stationed there for a reason.
Across the 192-pages, lots of threads are introduced with very little resolved by book’s end. The web comic was envisioned as a 300-page work but I suspect it has grown in size since then. This is the latest in a series of young adult graphic novels that offers annual installments (the second book is already promised for 2017). If I were a parent, I’d expect something resembling a complete story for my $20.

Pittman’s artwork and color and storytelling are all top-notch, which is not at all a surprise. Red is fun and the aliens diverse if all a little too human in their interactions. This is a fine introductory chapter promising lots of action and content in the next book.