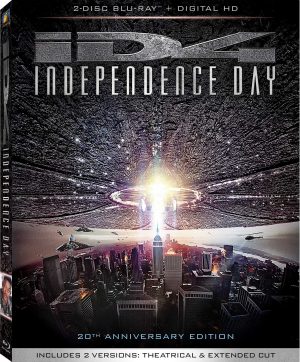 Twenty years ago, our summer films were big budget and fun, with just a dollop of seriousness to give them weight. They didn’t take themselves too seriously and more often than not delivered good performances, fine special effects, and plenty of bang for the buck. In many cases, they were original efforts that weren’t serialized or drawn from comic books despite their “comic book” feel.

One of the best of that bunch was Independence Day which, honestly, didn’t hold up to a lot of examination but gave us popcorn thrills and was really a 1950s disaster pic updated for the ‘90s. It’s a guilty pleasure and one we invariably stop to watch whenever we find it on television. A lot of credit goes to cowriter Dean Devlin and cowriter/director Roland Emmerich. It was well cast and kept moving, interweaving numerous threads that culminated in a terrific dog fight across America.

Looking back, we adore Bill Pullman’s rousing “let’s win one for the Gipper” speech right before the climactic battle or Will Smith punching out an alien and saying, “Welcome to Earth” before chomping on a stogie. You have fun character bits from Judd Hirsch and Harvey Firestein and this catapulted Viveca A. Fox to notoriety and a blossoming bromance between Smith and quirky Jeff Goldblum.

Does it hold up to story scrutiny? Considering the alien threat is stopped by a human-written computer virus delivered via an Apple laptop, I would say no.

Does it hold up watching 20 years later? Yep.

20th Century Fox Home Entertainment serves up a remastered 1080p high definition transfer and two Blu-ray discs worth of goodness. The film is a treat to see with fresh eyes as the colors pop and all the details are evident. This is clearly the best it has looked since the theater.  Promises of better aside, the DTS-HD Master Audio 5.1 lossless track that accompanies the visuals is just what you want.

Disc one comes with the theatrical release and an extended cut, clocking in at 2:33:33. The special features carry over many of the elements from the previous Blu-ray edition such as the dual audio commentaries.