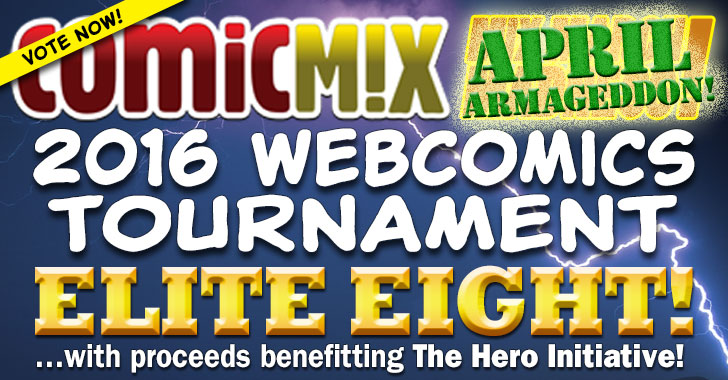 It’s Round 5, starring the Elite Eight of ComicMix’s April Armageddon 2015 Webcomic Tournament. Driving forces in webcomics standing toe to toe, going head to head. Being pitted against each other, fans standing together voting for their favorite until there is just one winner. Who will it be? Every survivor has chance at the brass ring. All they need is your vote!

Speaking of votes…give yourself a round of applause for the strong support for The Hero Initiative, with donations totaling $71.00 in round 4.

The Elite Eight will narrow the field yet again, So vote soon and vote often… and tell your friends. Polls close 12 midnight, Friday, April 22nd EDT!

We can consolidate the divisions into one chart, so let’s do so…

Yes, we heard you– we finally found the fix, so we can go back to our older polling methods…

And as always, we’re letting you support your favorite strips by paying for additional votes, with your money going to charity. Simply click on the Donate button below, and during checkout, click on “Which comic are you donating for?” and tell us who you’re voting for. The price is 20¢ a vote, with a minimum of five votes purchased at a time, split any way you want. All proceeds from paid votes will go to the Hero Initiative, an organization that helps comic book creators in need. At the close of the round, we’ll add the paid votes to the totals and announce the winners who move on to the brackets. (And yes, your donations to Hero are tax deductible.)