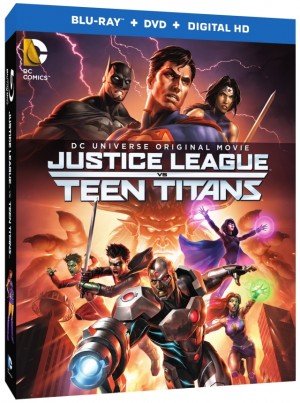 Now that the DC Animated Universe has solidified its characters and reality, it makes sense to go exploring. After all, if there’s a Robin, surely there must be other teen heroes. We meet some of them in the newly released Justice League vs Teen Titans.

Robin (Stewart Allen) is the focal point as his go-it-alone and I-know-better-than-everyone-else attitude actually gets him into trouble on a case that foreshadows the arrival of the demon Trigon (Jon Bernthal). A frustrated Batman (Jason O’Mara) arranges for Damian to spend time with Starfire (Kari Wahlgren) and the Teen Titans. Interestingly, this interpretation of the Tamaranean princess positions her a caring, mentor figure as opposed to the current fish-out-of-water incarnation or the innocent warrior she was originally seen as. She is training the next generation composed of the Jamie Reyes Blue Beetle (Jake T. Austin), Beast Boy (Brandon Soo Hoo), and Raven (Taissa Farmiga).

As you would expect, Robin does not fit in and upsets the nascent team chemistry. Starfire eventually hits on the idea of a fun outing, a team bonding trip to the carnival where icy exteriors soften amid the friendly competition.

Meanwhile, Trigon’s forces have been seeping into the world and Superman (Jerry O’Connell) has been possessed and has fled, leaving a depleted League to figure out what’s happening. Why Shazam and Green Lantern are absent is never properly covered which is shame but Cyborg (Shemar Moore), Wonder Woman (Rosario Dawson), Flash (Christopher Gorham), and Batman get to work.

Once the connection between Trigon and Raven is established, the inevitable conflict between teams is brought forward and the battle is mercifully brief. While Sam Lu’s direction is solid, it’s a shame that, I gather, budget concerns limited the fight to showing any two opponents at one time as opposed to nearly multiple figures making for a richer battle. The only two rule grew annoying throughout the entire production. 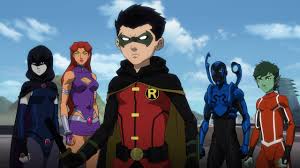 The DC Universe Animated Original Movie benefits from Bryan Q. Miller and Alan Burnett co-writing the screenplay since it treats all the characters with respect and allows time for characterization. There’s some nice byplay between Starfire and Nightwing (Sean Maher) and Superman and Wonder Woman that strengthens the overall production.

The generation gap between the teams is no longer as wide as it once seemed in the comics and the bickering between sides is kept to a minimum, in favor of the teen’s sticking up for one of their own. While this might be about the obvious Robin learns the obvious teamwork theme, it’s also about a young girl confronting her destiny and dealing with the world’s worst parent. 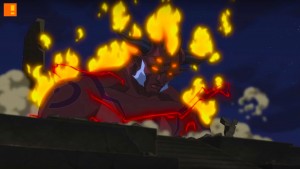 DC clearly intends on doing more with the Titans in the animated world given the final scene just before the credits roll.

The 79-minute animated film comes in a Combo Pack with Blu-ray, DVD, and Digital HD in addition to a collector’s edition complete with Robin figurine. It looks and sound just fine, as one would expect.

There are a smattering of extras including Growing Up Titan (23:46) wherein Marv Wolfman, Mike Carlin, co-publisher Dan DiDio, and producer James Tucker explore the nature of sidekicks and why the Teen Titans has remained one of DC’s most enduring titles for five decades. The same gang reunited for Heroes and Villains: Raven (6:05) and Heroes and Villains: Trigon (5:17) does much the same for this satanic arch-villain. Rounding out the collection is A Sneak Peek at DC Universe’s Next Movie: Batman: The Killing Joke (10:15) and Batman: The Brave and the Bold: “Sidekicks Assemble!” (22:52) and Teen Titans: “The Prophecy“(23:02).