This past weekend was Emerald City Comic Con. It’s one of the up-and-coming cons that seems to be getting exponentially bigger and more important to the industry every year. I have yet to have the pleasure and privilege to attend ECCC, but it’s on my bucket list.

ECCC has increased in importance to the point where some major announcements in the comic world are now made there. One of the biggest, if not the biggest, announcement made was from DC Comics. They announced a new DC imprint headed by Gerard Way titled Young Animal. The flagship title of this new imprint will be Doom Patrol; the first issue of which will be hitting the shelves in September of this year. I know he’ll be writing or otherwise involved in all the titles Young Animal is putting out including Shade, The Changing Girl, Cave Carson Has A Cybernetic Eye, and Mother Panic, but today I’m focusing on Doom Patrol. 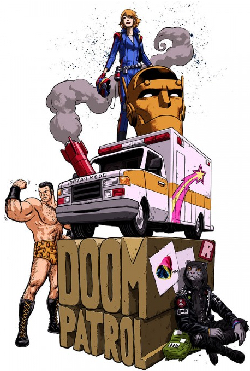 Gerard Way has stated the plans for Doom Patrol will be to pay homage to all the previous iterations while creating a unique story. In this interview, it’s discussed how Way has read every run of Doom Patrol and that there are great elements in all of them (that may be overly generous, but that’s not the point) which this run will make nods to.

In particular, it looks like this run will be heavily influenced by Grant Morrison’s run considering Flex Mentallo is one of the characters who appears to be in the preview art. And keeping in the tradition of the other runs, Robotman appears prominently as well. Gerard Way continued to reveal more on Twitter. Way tweeted that there are “special plans” for Dr. Caulder, which seems to reinforce the idea that Grant’s run having made Caulder a more complicated character will continue.

The most interesting thing about Doom Patrol that was revealed on Twitter (and I’m incredibly biased here) is how much Gerard Way loves Rachel Pollack’s run on the series. Way even specifically mentioned love for Coagula in an exchange. You can read that here. At least one other person I saw tweeted at him about Rachel’s run too which was nice to see. Though it’s not explicitly mentioned that Way would bring back Coagula, this is certainly the most positive statement in regards to the notion that’s been made since Rachel Pollack’s run came to an end.

I won’t delve too deeply into Coagula as that was what I dedicated my second column on here to. Please feel free to read it if you haven’t. In short, she’s DC’s first and only trans superhero. Not that they haven’t had trans characters in comics that aren’t superheroes, or that they haven’t printed other books with powerful trans characters, but they weren’t DC properties (Grant Morrison’s Invisibles is creator-owned for example).

Coagula, and Rachel Pollack herself, are important parts of history at DC Comics. I’m not going to say we need Coagula now more than ever. We’ve needed her ever since she came into existence. What I will say is that it’s not too late to make things right.

I understand how many people might not realize how big this is, but this is a big deal. In the decades since Rachel’s run, multiple failed attempts to revive the series have taken place. All of which got cancelled sooner than Rachel’s run and all of which have tried treating the Doom Patrol as a superhero team. That’s a mistake. They aren’t. Arnold Drake and Murray Boltinoff with Bruno Premiani created this team and set the groundwork for things to come. Grant Morrison with Richard Case understood that groundwork. Rachel Pollack with Linda Medley and Ted McKeever understood that too. No one else has understood that in the same way for decades until now.

I had the opportunity to talk to Rachel Pollack after my brief Twitter exchange with Gerard Way. “Wow! Times have changed.” she said. She went on to say that she’s a fan of Gerard Way’s Umbrella Academy. Who knew?

I’ll be honest, I was skeptical at first when I heard DC was bringing back Doom Patrol. Not because I doubted Gerard Way’s ability to write or craft a story, but was it going to be done right? Obviously right in this context is subjective. Like the feeling I get whenever I meet a Doctor Who fan and they tell me that their favorite Doctors aren’t either Patrick Troughton, Jon Pertwee, or Peter Davison. Sure, they may like Doctor Who, they may have a great reason for liking the Doctor they like, but it’s not my Doctor Who.

When you’re a big fan of a work, your strong attachment to it tends to be linked to aspects of that work. For me with Doom Patrol, it’s the weirdness, it’s the absurdity, but it’s also the heart. It’s not just revealing a contradiction to defeat the Scissormen (thanks Glenn!), or stopping the men from N.O.W.H.E.R.E. from exterminating eccentricity, but it’s Robotman risking life and mechanical limb to save Crazy Jane by going into her mind and riding with the Conductor to find her. It’s Robotman learning about Coagula and discovering more about himself through his initial bigotry to become a better man than he was before. It’s about heart, love, and acceptance. It’s about life and its power to take away from you and how sometimes it can feel like everything has been taken away, but sometimes you crawl from the wreckage, get back on your feet and slide in the wreckage and before you realize it you’re shining through the wreckage of your life.

Gerard Way gets Doom Patrol. It’s been decades since someone has gotten it quite like this. More than any other comic coming out this year from the big two, I am looking forward to this one the most. I’ll be buying multiple copies of issue #1, giving them to people who will take it, and spreading the good word. Doom Patrol means something to me. Maybe it’ll mean something to you too. And DC might have finally got it right again.

I’m looking forward to the ride. I’m thrilled that we’re being led by someone as talented as Gerard Way who understand this property so well and is a genuine fan of the series. And I’ll gladly follow Way’s run on Doom Patrol to the gates of hell, which in all likelihood is probably already on the team’s agenda. Maybe this will help finally get Rachel Pollack’s run reprinted too. Because honestly, who doesn’t love Coagula?