Round 3 of the Mix March Madness 2016 Webcomics Tournament! 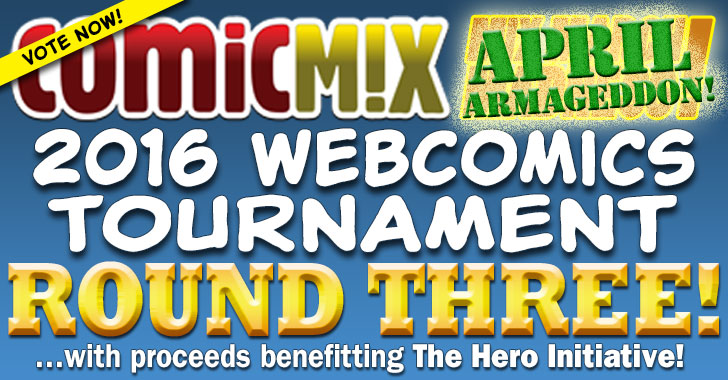 Now that those basketball games are over (go Wildcats!) we’re ready for Round 3 of the 2016 Mix April Armageddon Webcomics Tournament! Yes, it’s time to take on the Top 32… and you have until Wednesday, April 6 at midnight EST to vote!

Congratulations to everyone who made it through Round 2, and we’ve raised another $30 for the Hero Initiative. But now it gets even tougher, as we’re down to only 32 webcomics… and we know that every vote counts from you and all your friends, so make sure to share and tweet about it, because Round 3 starts now!

Here are the updated brackets. As usual, we’re dividing the candidates into four divisions. This year’s divisions are Anderson, Obadiah, Ryan, and Trimpe…

As usual, we’re letting you support your favorite strips by paying for additional votes, with your money going to charity. Simply click on the Donate button below, and during checkout, click on “Which comic are you donating for?” and tell us who you’re voting for. The price is 20¢ a vote, with a minimum of five votes purchased at a time, split any way you want. All proceeds from paid votes will go to the Hero Initiative, an organization that helps comic book creators in need. At the close of the round, we’ll add the paid votes to the totals and announce the winners who move on to the brackets. (And yes, your donations to Hero are tax deductible.)