Martha Thomases: Well, We Do Need Those Stinkin’ Badges, So… 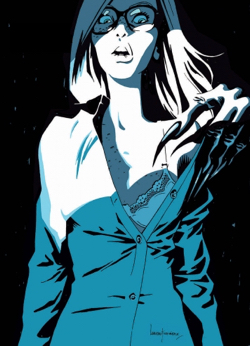 ReedPOP has done it again. They messed up the Emerald City Comicon. It’s not permanent damage (at least, I hope not), and they’ve taken steps to fix things, but I suspect that they still don’t entirely understand what happened.

I don’t know anyone at ReedPOP, nor do I have a source who clues me in on their inner workings. Everything I say is speculation, nothing more.

Last week saw the release of the first issue of The Discipline from Image Comics by writer Peter Milligan and artist Leandro Fernandez. I have loved Peter Milligan for more than 20 years, and eagerly bought the issue. I’ve read it, don’t entirely understand what’s going on, and look forward to more story.

Image is holding its Expo, formerly a free-standing event, at Emerald City this year. As a result there will be a lot of Image creative talent at the show, and I imagine a fair amount of cross-promotion. One of the elements of this marketing concept is to put Image art on the badges for attendees.

And that’s where the problem began. The Sunday badge sports the cover image from The Discipline #1, a woman in shadow, her blouse being opened by a monster’s hand. If you read the actual comic, you’ll see that this is a complicated situation, unsettling but consensual. On the badge, with no other context, it just looks creepy and rape-y.

Social media blew up, and many women said they found the artwork offensive, even triggering. As a comic book cover, they have the option to walk away and read something else. As a badge to get into a convention they already paid for, the choice is to throw away the admission price or suck it up.

ReedPOP admitted they had a problem and offered a solution. To quote from the link, “We would like to extend the offer to all Fans who are concerned that they may exchange their Badge on Sunday at Will Call for a different Badge that does not feature that art.”

I’m not sure I like this solution. It means that, if I have on the replacement badge, I’ve identified myself as a person who was abused, or a feminist, or some other political position that I might not want to discuss on a day when I just want to look at comic books, meet creators and other fans, and maybe dress up like my favorite super heroine.

Who am I kidding? I’m always delighted to be identified as a feminist. Still, I would like it to be my choice, not ReedPOP’s.

This could be chalked up to a simple misstep if ReedPOP hadn’t made almost the exact same mistake two years ago. And they responded in almost exactly the same way.

It’s not as if ReedPOP isn’t trying. They have an excellent anti-harassment policy that demands respect and consideration for everyone. Even better, that sentiment is echoed in the convention’s general rules. Both of these documents demonstrate an understanding of what fans want and need in their convention experience.

And it’s also interesting to see how far ReedPOP goes to show their customers they get it. This article illustrates how they are bending over backwards to celebrate cosplay and cosplayers on their own terms.

So what can we do about the badge business?

I don’t think they do these things maliciously. To paraphrase Chris Rock, this isn’t Boko Haram sexism, it’s sorority sexism. It’s an attitude that is so entrenched in our society that, unless it affects you directly, you might not notice.

Therefore, the solution, it seems to me, is to collect people who will notice. Form a committee and, before finalizing these kinds of decisions, run it by them. I’m not saying that victims of sexism (and racism and ableism and homophobia and xenophobia and holy crap we have swallowed a lot of hate in our society) should have a veto over creative content. Instead, I’m suggesting that they might notice a message ReedPOP doesn’t intend to send before it is sent. The committee would not act as censors who ban things, but as copy editors who improve clarity.

Yeah, you heard me. I’m saying that Fowler and Strunk & White are important tools for radicals.