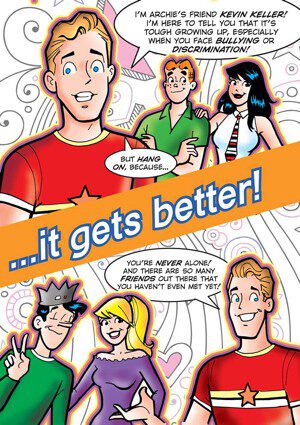 Over the last week or so, we’ve seen two positive affirmations of the greater queer community at two of the biggest comic franchises. Over at Archie Comics, Jughead is officially asexual. Down at Marvel, the pansexual Deadpool crushed box office records for an R rated movie at the box office. Will these queer portrayals in comic culture start a push for better and more complex looks into the sexualities of the characters we read and watch, or are we in for more of the same?

Let’s start with Archie. For years, Archie Comics has been slowly reinventing itself. With the help of creators like Dan Parent, the openly gay Kevin Keller has been a breakout student down in Riverdale. Following some years later, Chip Zdarsky has Jughead officially come out as asexual. I think it was an interesting choice having Kevin Keller be the one to use the word asexual in conversation with Jughead, rather than Jughead use the word himself, as a way of seeming to carry the tradition on from one character on the queer spectrum to another. And the way the conversation went did so without taking away from Jughead’s agency, unlike Marvel’s poor handling of Iceman being outed in All-New X-Men nearly a year ago.

I applaud Archie Comics and Chip Zdarksy for expanding its representation to this sexual orientation minority. Asexuality is something that both inside and outside the queer community has been argued over and is often misunderstood. Asexuality manifests in different ways for different people. For Jughead, he also identifies himself as aromantic, which is perfectly fine. Not all asexuals are aromantic. Asexuals don’t necessarily have an entirely non-existent sex drive. They may just have a low sex drive. They may end up in a monogamous relationship with an opposite sex or same sex partner where they may engage in sexual activity. That doesn’t mean they aren’t asexual. Just like when a bisexual person is in a monogamous relationship, that doesn’t suddenly mean they aren’t attracted to the opposite gender of their partner. And no, it is never, ever, ever your job to try to help them see that sex is great and they’re missing out. Ever. Never ever. Please always remember that. 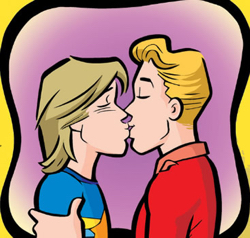 This isn’t something I immediately knew and understood at a young age. It took time. I remember as a teenager on the internet in the late 90s to early 2000s checking out sites like the now defunct xy.com and chatting with a few men who identified as asexual. At the time, I thought if they weren’t sexually attracted to the same sex they wouldn’t be here, and that they were repressed and looking for someone to help them come to terms with their sexuality. That was wrong of me and I understand that now.

Some of the arguments and tension towards the asexual segment of the queer community comes not only from some of the misunderstandings, but it also comes from asexual treatment in our society and laws versus treatment of people in the LGBT community. The asexual community hasn’t necessarily in the minds of other people been affected the same way by our laws. That’s not entirely true in that an asexual who is not also aromantic could have potentially been denied the ability to marry who they wanted until recently, as well as being affected by other homophobic or transphobic laws on the books.

Asexuals also have to deal with societal pressures like most people in the queer community do. I certainly can relate to being in uncomfortable conversations with people that were aggressively heterosexual in nature when I was younger, either not out or not as confident at the time and not being sure how to handle the situation. Not to mention the conversations about how you need to have hetero sex before you can rule it out. Again, please don’t tell people they need to have sex to understand themselves and especially never imply to people that you are the one they should be having sex with in that scenario.

Moving on to Deadpool, I’ve mentioned in at least a few of my previous columns that although Deadpool is being billed as the first pansexual superhero in a major motion picture, that we have to wait and see how that ends up being handled. My fear was that most of Deadpool’s behavior that falls outside of the heteronormative would end up being joke fodder. I was at least partially right.

This isn’t really a spoiler for anything major in the movie, but if you’re avoiding anything regarding details in the Deadpool movie (or want to avoid the kind of vulgar subject matter that conspires in the movie) you may wanna skip the next paragraph.

Now that we got that out of the way, here’s the deal. We do see Deadpool engage in some behavior that’s considered outside the norm. He’s confident in himself, his sexuality, and it doesn’t make him any less of a powerful and threatening character. However, most of the instances when he’s doing something outside the heteronormative, it’s a joke. When he’s with his girlfriend they have a montage of different holidays they have sex on. For International Women’s Day, she ends up pegging him. It’s played for laughs. Other instances including kissing a pizza delivery boy on the cheek after threatening him, and complimenting his male taxi driver. This doesn’t necessarily help all that much in terms in pansexual representation.

If sexuality outside the norm is played purely for laughs, it’s just a joke and it’s not about being inclusive. That’s not also to say that we shouldn’t have any fun with sex and sexuality either. And I will give Deadpool credit in that it’s good to see more heroes who have less traditional sexualities and can help combat the dated and offensive notion that queer people are somehow weaker and can’t be taken seriously. More and more characters in nerd culture like Doctor Who’s Captain Jack Harkness have been coming out and combating this for years now, but stereotypes are damaging and linger.

Between Jughead and Deadpool in this last week, I feel that it was one of the best weeks for greater queer representation in comics and comic culture. Sexuality is not black and white, and I think these characters and the stories being told with them in comic culture are helping to show that sexuality is complicated, fluid, and can’t truly be encompassed by a single word.

Oh, and it can be profitable at the box office too.