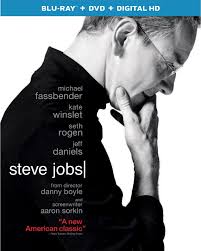 We think we know Steve Jobs, the maestro behind Apple but unless you read one of his biographies or watch Jobs or Steve Jobs, you only have impressions. General audiences will recognize the man in the black turtleneck and know he gave us the iPod, iPhone, Macintosh, etc. but most will mistakenly credit him for being the builder of these gadgets.

Read Walter Isaacson’s wonderful biography or study Jobs through the myriad video interviews or articles available online and you come to understand he was a visionary who pushed, prodded, cajoled, wheedled, and demanded his workers to meet his exacting standards.

Capturing that volatile and complex man on film would be a challenge for any production crew but director Danny Boyle and screenwriter Aaron Sorkin were the kind you wanted for something challenging. Sorkin took Isaacson’s bio as a starting point but then read and read more material. He spent time with Jobs’ first partner Steve Wozniak and knew he couldn’t write your standard bio pic for a most un-standard figure. The resulting Steve Jobs is out tomorrow from Universal Home Entertainment as a combo pack with the Blu-ray, DVD, and coupon for Digital HD. 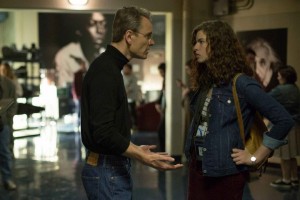 Instead, he boiled the story down to three pivotal product introductions (the Macintosh, the Black Cube, the iMac) and stuffed all the drama into backstage antics in the countdown to taking the stage. Events and conversations are telescoped into these three vignettes with a sprinkling of flashbacks. Sorkin then led us through the fourteen years by focusing on the evolving nature of his relationships with several key people in his life: Woz (Seth Rogan), Apple CEO John Sculley (Jeff Daniels), his marketing chief, Joanna Hoffman, and finally, his daughter Lisa (Makenzie Moss, Ripley Sobo, and Perla Haney-Jardine), who he at first refuses to acknowledge any blood relation and comes to cherish. The Sorkinisms are largely missing but his rapid-fire style remains visible.

That father/daughter relationship humanizes Jobs and provided Sorkin with the emotional spine to the film. Otherwise, we’d revile the volatile Jobs as he treats one person after another as a mere functionary in service to his grand vision.

Boyle is a visual stylist and gave each act a fresh look and feel, starting with shooting with three different film stocks (16mm, 35mm, digital) and staging each in a different way. 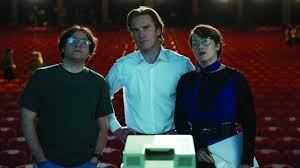 What makes the film work, better than the box office and critical acclaim admitted this past fall, is Michael Fassbender and Kate Winslet, the latter nearly unrecognizable in a tough part. Fassbender doesn’t look like Jobs but inhabits the persona and you believe him to be the mercurial genius who slowly mellows across the years.

The 123 minute film is worth a look if you haven’t read up on Jobs or if you want to see a lovely ensemble tackle a difficult topic and freshen the bio pic genre. The movie’s high definition transfer is superb and the DTS-HD Master Audio 5.1 lossless soundtrack is its match.

There’s a three-part feature on the making of the film which is quite compelling. Inside Jobs: The Making of Steve Jobs (44:11) explores everything from the story structure to recreating three specific time periods, and the extensive rehearsal process for each, which led to excellent performances all around.

The movie comes with two audio commentaries, one from Boyle and one from Sorkin and Editor Elliot Graham. Each are fascinating in their own way although there is some repetition from the special feature.