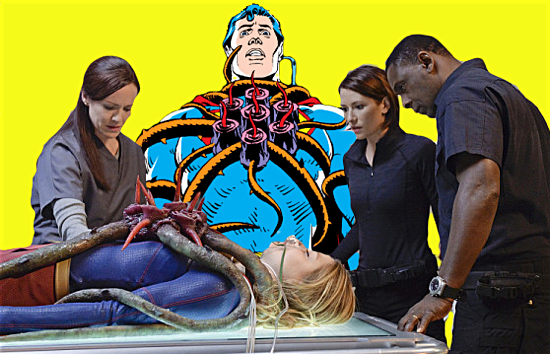 So it turns out that I maybe I do have a TARDIS, because I was able to finish watching Jessica Jones and to catch up on Supergirl.

You remember that basically crappy review of Supergirl I gave a couple of months ago? Well, the show is getting there, though, im-not-so-ho, they aren’t taking advantage of what could be some great story arcs. Except for Alex Danvers. And Cat Grant. And Hank Henshaw. But more on that in a bit.

I watched “Strange Visitor From Another Planet,” an hour that really could have called “Why Did You Abandon Me?” Hank Henshaw, a.k.a. J’onn J’onzz the Martian Manhunter, struggled with the personification of survivor’s guilt and abandonment in the appearance of a “White Martian,” a member of the “other” Martian race responsible for the Martian holocaust – a literal “Strange Visitor.” And while the psychological voices from beyond the grave – including his wife and two daughters – chastised J’onn J’onzz for abandoning them by not joining them in death, Cat Grant dealt with her own, different kind of survivor’s guilt and abandonment issues when her “Strange Visitor” turned out to be the child she had chosen to abandon in her drive to become a professional success, now all grown up and wanting to know why she hadn’t loved him enough to stay. “Bizzaro,” a twist on Mary Shelley’s Frankenstein, borrowed – well, stole – the origin of the sad creature from DC’s New52 reboot, only instead of Lex Luthor creating the “monster” from splicing Superman’s DNA with human DNA and injecting it into a teenager, it was Maxwell Lord splicing Supergirl’s DNA with the human DNA of comatose young women who “resembled” Kara Zor-El. I thought the show sorta fell down on this one – it was essentially a “monster of the week” episode with Bizzaro Supergirl dying at the end and Maxwell Lord becoming “The Man in the Glass Booth,” kidnapped and imprisoned – for now – at DEO headquarters. Which is rather illegal, and I assume will lead to further ramifications down the line.

One immediate ramification of Max hanging around the DEO, though, is that he just happened to be handy when the alien chest-hugging flower called the “Black Mercy” dug its tentacles into Supergirl’s rib cage and inflicted her heart’s desires upon her in a hallucinatory mind-game. Many of you will recognize this as an adaptation of Alan Moore and Dave Gibbons’ 1985 Superman Annual #11 story, For the Man Who Has Everything.

It’s not a bad adaptation, but if you remember FTMWHE, it’s not quite up to par in comparison, especially in the Krypton sequences. Granted, the show’s budget had to be a serious factor in producing this episode, but in Superman’s dream world, we really become invested in Kal-El’s life on Krypton and in Kryptonian society. Kara Zor-El, however, never leaves her home. She just sits in the “living room” talking with her parents and Aunt Astra, who was never banished to the Phantom Zone. Oh, yeah, and we also meet a prepubescent Kal-El, though there is neither mention of nor a visit from Jor-

El and Lara. And though there is mention of a serious boyfriend, we don’t meet him nor do we see anything else of what Kara’s dream life if Krypton had not exploded entails.

In Superman’s dream state he has no memory or sense of anything wrong – well, the dream does start becoming increasingly disturbing – but Kara’s immediate reaction when waking up in her bed on Krypton is one of confusion and a sense that something is definitely wrong. But as the Black Mercy continues its psychic invasion, Kara starts forgetting, and by the time “virtual reality” Alex shows up she has accepted her life for what it is and does not recognize her “Terran” sister.

It’s a good attempt, but not one for the ages. For one thing, for a story about Supergirl’s lost dreams, it’s a fantastic showcase for Alex, who totally steals the scene(s). Alex’s quest to save her sister, her devotion to her, is really what this episode is about – and I don’t know if that’s what the writers had in mind. In fact, lately it almost seems that the title should be Supergirl’s Sister, Alex Danvers. She has become the most well developed character on the show (with Cat Grant coming up behind and Hank Henshaw/J’onn J’onzz nipping at Cat’s heels). It’s too bad, because this could have been a real showcase for Supergirl/Kara Zor-El.

And, again, wasn’t it convenient that Max Lord was on DEO premises so he could help develop the “virtual reality” psychic connection thing-a-ma-jig that got Alex into Kara’s dreamland in the first place?

However, Melissa Benoist did a bang-up job in displaying Supergirl’s anger and rage and hurt and sorrow when she woke up. Echoing Moore’s words, she spits out “Do you know what you did to me?” and then “Burn” as she lashes out with her heat vision against Non, the evil – and oh so incredibly boring – Kryptonian who’s Aunt Astra’s husband, and who exposed her to the Black Mercy in the first place.

There’s a lot more plot about Non’s plan to destroy Earth (or something – I’m not quite sure exactly what he wants to do), but there’s a twist at the end that really disappointed me, which now means that it’s

Astra is killed by Alex.

This is right up there with the whole “fooling Cat Grant and convincing her that Kara isn’t Supergirl” storyline. I mean, Boo! Hiss! Really, Bernanti, Adler, et.al., killing off what could have been a fascinating character and story arc? Again, Boo! Hiss!

And as for JJ – it left me shaken and stirred, with that uncomfortable feeling you get when you’ve had a horrific nightmare which stays with you all day, or after you’ve made the mistake of watching a double feature of Fail-Safe and Dr. Strangelove (Or How I Learned To Stop Worrying And Love The Bomb) on Turner Classic Movies.

SPOILERS HERE FOR ANYBODY WHO HAS ALSO BEEN LATE TO THE PARTY!

What really got me was the straightforward and uncomplicated denouement of David Tennant’s Killgrave – a simple twisting of his neck, a quick dislocating of his cervical vertebrae, a horrific rupturing of the right and left common carotid and vertebral arteries, and he’s as dead as the Tyrannosaurus Rex that King Kong killed using the same method – only with a lot less fight than in that epic battle. It was so straightforward, not what is usually expected when dealing with the gifted, as the show’s super-powered individuals and others called them; in comic-book land fights are usually a chance for the artist to strut his stuff, consisting of many panels and sometimes many pages of balletic and brutal brawling. What I thought, as Jessica approached Killgrave, was that she was going to rip his tongue out, which would certainly, I think, have been an apt Sisyphean punishment for him – King Sisyphus of Ephyra was punished by Zeus for his hubris, lying, greediness, and self-aggrandizing by being condemned to push a gigantic boulder up a steep hill, only to have it roll back down to the bottom before reaching the top, repeating this pattern forever and ever and ever.

Killgrave with his tongue is essentially powerless, and as I said, it would have been a fitting punishment; but Jessica said she was going to kill him and she did. But though it looked simple it wasn’t; Jessica Jones literally killed her demon. But the question is: Will it be enough? Stay streamed.

I now have an even bigger crush on appreciation of David Tennant.