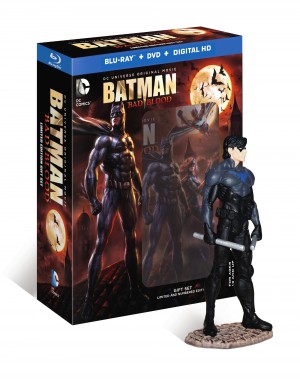 The newly integrated DC Animated Universe expands with its latest offering, Batman: Bad Blood. While Batman (Jason O’Mara) can work best as a loner, he casts a long enough shadow that somehow involves others to take up the mantle of the Bat. We’ve seen Nightwing (Sean Maher), the former first Robin, and the addition of Bruce Wayne’s son Damian (Stuart Allan) as the new Robin has added an edge.

The new animated film, out now from Warner Home Entertainment, has been sold as the major introduction of Batwoman (Yvonne Strahovski) but we also get Batwing (Gaius Charles) and at the end a cameo from Batgirl. As a result, it’s actually beginning to feel a little too busy with so many players there’s not enough time to properly service them.

The premise here has Talia (Morena Baccarin) recruiting a bunch of disparate rogues to help her break Batman. He’s abducted early on and this forces Nightwing to come back to Gotham and assume the role of Batman to offer some measure of calm to the citizenry. When this happens in the comics, we usually see the chaos resulting from Batman’s absence but that trope is absent here as the focus remains on the Batman family versus the Talia Gang.

Batwoman was present when Batman was taken and its clear there is some familiarity between Kate Kane and Dick Grayson and their quiet scenes of them just interacting are actually some of the best parts of the film. She is welcome by Dick and later, when Batman is rescued (no spoiler there), he rejects her as being outside the family, especially since she uses guns which remain anathema to him. 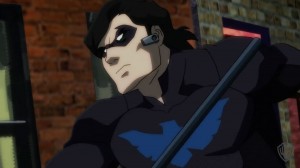 When the villains attack Wayne Enterprises and make off with some of the toys Lucius Fox (Ernie Hudson) has built for Batman, Fox’s son Luke somehow has the wherewithal to know how to program the machines to custom fit him into an armored suit (holy Iron Man!). Not only that, he has quickly mastered all the gear, knows how to fly, and fight in the suit. No learning curve required which is a weakness. Frankly, I find Batwing a totally superfluous character in the comics and in here and wish the time had been better spent on fully integrating Batwoman into the animated firmament.

Or time be spent on explaining how Talia recruited Mad Hatter (Robin Atkin Downes), Firefly (Steve Blum), Onyx, Killer Moth (Jason Spisak), Electrocutioner (Downes), Tusk (John DiMaggio), the Calculator (Spisak) Blockbuster (DiMaggio) and Hellhound (Matthew Mercer) and what she really wanted because it’s all a little vague. Her comeuppance actually rings false at the very end and since there’s no body, we know the daughter of the demon will be back. 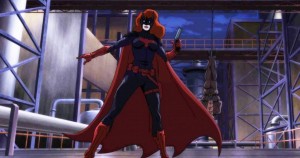 Most of these films overdo the fight sequences, a complaint I raise almost every time. Here, thankfully, director Jay Oliva scales things back just enough so there’s action aplenty. But, he also lets J.M. DeMatteis’ script breathe and the characters actually have scenes where they talk to one another, adding more characterization than we normally receive. Kudos to DeMatteis for making this one of the more satisfying offerings from Warner Animation.

The animated film looks and sounds just swell on high definition. There are a variety of formats available and the one reviewed was the collector’s combo pack so the case contains the Blu-ray, DVD, and Digital HD code along with a Nightwing figure. The Blu-ray disc has an okay assortment of special features starting with Putting the Fight in Gotham (26:26) which focuses on how to make the characters move in action and choreographing the massive battle sequences. Of more interest was the shorter Expanding the Batman Family (13:46) where Mike Carlin, ComicMix’s Alan Kistler, producer James Tucker, and director Oliva talk about adding in Batwoman, Batwing, and even Batgirl. There’s some history skipped and missing but they trace the growth of the family from the first Kathy Kane intro in the 1950s up through Damian today.  Rounding out the features is A Sneak Peek at DC Universe’s Next Animated Movie: Justice League vs. Teen Titans (11:31) which looks and sounds promising. We’ll know for certain in April. There are also two episodes from Batman: The Brave and the Bold included: “The Knights of Tomorrow” and “The Criss Cross Conspiracy”.