Steve Jobs Comes to Homes via Streaming & Disc in February 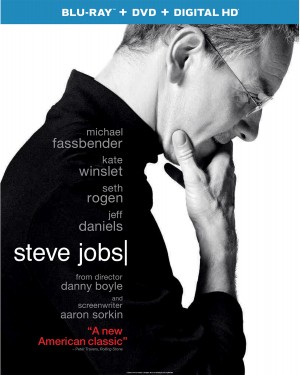 Universal City, California, January 21, 2015 – An intimate and revealing portrait of one of the chief architects of the digital age, Steve Jobs is coming to Digital HD on February 2, 2016, and Blu-ray™ Combo Pack, DVD and On Demand on February 16, 2016, from Universal Pictures Home Entertainment. From Oscar®-winning screenwriter Aaron Sorkin (The Social Network, Moneyball) and Oscar®-winning director Danny Boyle (Slumdog Millionaire, 127 Hours), Steve Jobs is an up-close-and-personal look at the founder of Apple, a remarkable creative genius whose vow to put computers in the hands of ordinary people changed the world.  A “must-see, one-of-a-kind that cannot be ignored” according to Indiewire’s Anne Thompson, Steve Jobs on Blu-ray Combo Pack and DVD also comes with a revealing “making-of” documentary and feature commentary by the filmmakers.

Witness the founder of Apple like never before. Steve Jobs paints an intimate portrait of the brilliant man at the epicenter of the digital revolution, backstage in the final minutes before three iconic product launches. Directed by Academy Award® winner Danny Boyle (Slumdog Millionaire), written by Academy Award® winner Aaron Sorkin (The Social Network) and starring Michael Fassbender, Kate Winslet, Seth Rogen and Jeff Daniels.  Michael Fassbender (Inglourious Basterds, 12 Years a Slave) stars as the enigmatic Jobs, headlining an accomplished cast that includes Academy Award-winner Kate Winslet (The Reader, Titanic), Seth Rogen (Neighbors, This is the End) and Jeff Daniels (The Newsroom, The Martian) in an unexpected and enthralling film that led Peter Travers of Rolling Stone to declare, “Steve Jobs is a triumph.”

The film will be available on Blu-ray™ with DIGITAL HD UltraViolet™ and DVD
•    Blu-ray™ unleashes the power of your HDTV and is the best way to watch movies at home, featuring 6X the picture resolution of DVD, exclusive extras and theater-quality surround sound.
•    DVD offers the flexibility and convenience of playing movies in more places, both at home and away.
•    DIGITAL HD UltraViolet™ lets fans watch movies anywhere on their favorite devices. Users can instantly stream or download.