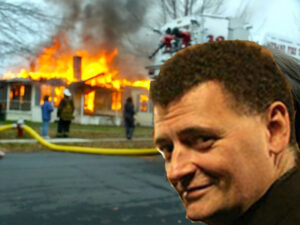 In an emotional rollercoaster of announcements, the BBC revealed that showrunner Steven Moffat would be leaving Doctor Who after series 10, which they then announced would not begin until Spring 2017.  The only new episode for 2016 will be the Christmas special.

Steven’s shoes will be filled by Chris Chibnall, far from a stranger to the series. In addition to numerous episodes of the series including the “mini-sode series” Pond Life, he’s written many episodes of Torchwood, and most recently was the creator and showrunner of the mystery series Broadchurch, starring David Tennant and many other Who-lumni.

Chibnall said, “Doctor Who is the ultimate BBC program: bold, unique, vastly entertaining, and adored all around the world. So it’s a privilege and a joy to be the next curator of this funny, scary and emotional family drama. I’ve loved Doctor Who since I was four years old, and I’m relishing the thought of working with the exceptional team at BBC Wales to create new characters, creatures and worlds for the Doctor to explore. Steven’s achieved the impossible by continually expanding Doctor Who’s creative ambition, while growing its global popularity. He’s been a dazzling and daring showrunner, and hearing his plans and stories for 2017, it’s clear he’ll be going out with a bang. Just to make my life difficult.”

Moffat is not without comment either – “Feels odd to be talking about leaving when I’m just starting work on the scripts for season 10, but the fact is my timey-wimey is running out. While Chris is doing his last run of Broadchurch, I’ll be finishing up on the best job in the universe and keeping the TARDIS warm for him. It took a lot of gin and tonic to talk him into this, but I am beyond delighted that one of the true stars of British Television drama will be taking the Time Lord even further into the future. At the start of season 11, Chris Chibnall will become the new showrunner of Doctor Who. And I will be thrown in a skip.”

While a year without Doctor Who seems an interminable punishment, one must remember that 2016 will bring us the spin-off series Class.  Written by noted young adult author Patrick Ness, very little is known about the series yet, save for it’s set at Coal Hill School, where the series got it its start, and made quite the return to with Clara Oswald and the late lamented Danny Pink as a teacher. BBC America has announced that they’ll be carrying the series, which begins filming this spring.

Steven Moffat’s run on Doctor Who has been met with…shall we say “mixed” reviews, with wildly varied opinions on his handling of the character and the universe.  While there will likely be cheering from certain circles, one must remember that it was his contributions, both as writer and showrunner, that made the show a truly global phenomenon.