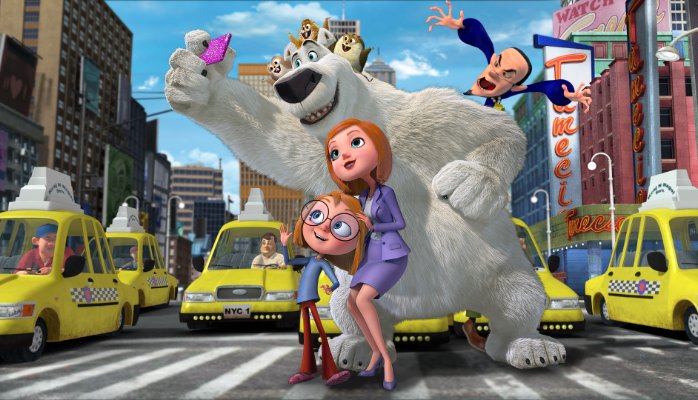 Norm of the North is the worst movie I’ve ever seen in a theater. There was not a single aspect of this movie that indicated that any more than the minimum amount of effort was expended by anyone in the production process. It’s a lifeless dud all the way around; the kind of movie that had me wondering if I could get away with walking out after the first half hour and reviewing the delicious burrito I ate for lunch instead. But I endured, and instead I’m here to tell you about this wretched disaster of a movie.

I have no stomach for lazy animation. Norm of the North is some of the worst animation work I’ve ever seen. The character models have a bizarre lack of detail and the textures often feel slapped on. There’s a killer whale character in the first act of the movie that looks like a concept drawing for an Alien xenomorph. The environments are flat including the most lifeless depiction of New York City I’ve seen on film since I Am Legend. There’s no activity in the background unless it is going to directly involve itself with the scene. Everything about the visual language of the film communicates that this is a dead world inhabited by haunting marionettes made by someone who had never seen a person or an animal with their own eyes. I don’t think Pixar, Dreamworks, or Disney would put out animation this bad for an interstitial scene on a mobile app, let alone a feature film, because it would be too embarrassing, I wish Norm of the North felt the same shame.

When my father saw substandard animation he would often say it would be better off as a radio play, and that is absolutely not the case with this film. This movie strains my suspension of disbelief at every turn in a way that a movie about Dracula running a hotel never did. The events and character motivations never feel organic or even like they follow naturally from the scene that preceded it, just like it was picked from whatever goldfish bowl passed for a rewrite here. It’s not clever, it’s not funny, it’s not provocative, and it’s just there because something needs to happen. There’s a hodgepodge of attempted morals that are adopted and dropped as soon as the scene is over it doesn’t even seem particularly committed to the stated goal of protecting the arctic.

I’m almost okay with Norm of the North being a terrible movie— mistakes happen even if they seem to involve two production companies and a major distributor having no idea what a coherent film are— but this isn’t just a bad movie, this wants to be a terrible franchise. The lemmings seem designed to be a spin-off property like the Minions before them (they got almost all of the laughs in my audience) and God forbid we allow those things to happen organically anymore. The “Arctic Shake” dance numbers come out of nowhere and have no service to plot or character, so I can only conclude there’s a nefarious piece of merchandise around the corner or some desire to go viral.

Reading that last sentence I get that I sound a little unhinged, as if I’m suffering from some sort of acute Norm of the North derangement, but that’s where I’m at with this movie. It was bad, worse than normal bad movies, worse than Pixels (the movie I just named the worst of 2015), it’s a movie so horrible that I find it hard to believe it’s a simple failure and instead begin to see it as an elaborate conspiracy to make a movie so insulting to the taste of any reasonable viewer. I would believe this move was the result of a bet between two executives about how bad a movie could be and still make a profit. I would believe this was some kind of Producers-esque scam and has been financed several times its budget only to be a surefire failure. Anything is better than believing this is an honest effort to make a good film, because it’s so heart wrenching to imagine that the gigantic team responsible for an animated movie could fail so spectacularly. It hurts to think of years of collective effort turning out this boring, ugly, nonsense.