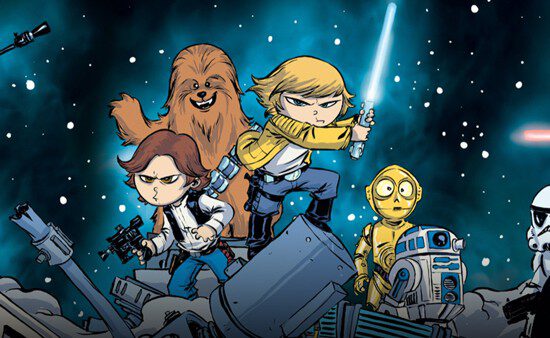 I know, I know, I know. Two Star Wars articles from ole’ Fish in the same number of weeks. He must be off his meds! Well, I was perfectly content to drone on this week about Jessica Jones, or really phone in my column with some generic platitudes of geekery for the new year ya’ll are celebrating here on this, the second day of 2016. But nay, I must dust off my hatespew bomber jacket and launch a complete snark to nerd strike like I haven’t had to do in the longest of times. Strap in – this is gonna be one Sith of a ride.

George Lucas came out to Charlie Rose’s Hulu series to declare that Disney – the “…white slavers that takes these things” – has shat the bed on his magnum opus, Star Wars. Yes, you read that clearly, Maz Kanata. Lucas believes that J.J. Abrams and Mickey are guilty of warping the intended vision of franchise with their “retro movie”. Per Georgie:

“They looked at the stories, and they said, ‘We want to make something for the fans’… They decided they didn’t want to use those stories, they decided they were going to do their own thing. They weren’t that keen to have me involved anyway.”

Let’s make it clear before I take my gloves off – Lucas is at peace with the sale of Star Wars. Per the interview (and others both at the original sale of the franchise and multiple since) he proclaimed his desire to move on. All he wanted to do then with Rose… was take a teeny tiny shit in the corner of the room before he left the house for good. Note that he has since redacted the “white slavers” phrase, so no hard feelings, right?

Well, maybe there weren’t any before. But now, I’m seeing red as well as Kylo Ren does in his daydreams.

It’s clear from the interview that Lucas is still very much in love with Episodes I, II, and III. His desire is still to stretch the boundaries of CGI in film. To explore new planets, new ships, and new aliens. This far surpasses any desire for good story, good performance, or good filmmaking. In his mind – per the childish retort – Abrams’ film is somehow pastiche or homage at best. That by starting from the perspective that the fans should be catered to, Episode VII is somehow a lesser product.

Of course, George Lucas is entitled to his opinion. Rare that I’d dare say this without jest behind it, but truly, his opinion is just wrong.

Beyond the overly syrupy glorification that was my column last week, I’m fairly certain most everyone has left the theater renewed in their love for that galaxy far, far away. And with a 94% rating on Rotten Tomatoes, so too, would the critics agree. It also doesn’t hurt that at the time of writing this article, the flick has grossed $1,200,000,000 – not counting any of the tie-in merchandising and futures to come. Are we all just blind? No, we’re not.

What grinds my gears to a screeching halt is the “have your cake and eat it too” attitude being presented. George Lucas walked away with four billion galactic credits with the sale of his epic franchise. And with it, should have gone his right to say anything short of a wookie moan of utter pleasure. Episode I, II, and III were a cacophony of wooden acting over thin plotting with a greasy sheen of CGI gloss so thick the 2-D prints came with a Z-axis. That here, in the wake of near global cheer over the apology that was The Force Awakens, we learn that deep down, George had his fingers crossed the whole time. Not that it matters. I think one of the better parts of this interview dropping has been my Facebook feed choked with support for the new film – and the expansion of the Star Wars brand now firmly in the hands of artisans who will bring back the spirit of collaboration that made the original trilogy the success it was in the first place.

This leads me down the path towards the bigger question of creator rights. Simply put: how well can we truly part with our creations? In the face of a big fat paycheck, can we look the other way as our brainchildren become the pawns of a new master? And regardless of whether our intellectual property is handled well, or becomes 2015’s Fantastic Four, are we allowed to publicly offer a cold shoulder and a smirk? If the blaster were held to my temple, I’d quickly say no. The check cleared, and with it any right to be involved in the conversation any longer. Especially if with that deal came the feeling that there were no “keen” feelings to share with one another once the ink was dry.

George Lucas now is akin to Anakin Skywalker. He is too worried about his own ego and power – sounding less like a Jedi master, and more like an immature child complaining about the feeling of sand in his shorts.