In these waning days of 2015, our media tends to look backward at all the great stuff that came down during the previous year. That’s because there’s damn little that happens between Christmas Eve and New Year’s morn and people like me are tasked with filling space. This plays nicely with my powerful sense of cynicism. Hey, it’s a living.

But what the hell. For all practical purposes 2015 is already history (and I hope that comment doesn’t come back to bite me in my ass). Instead, in a fit of optimism I’d rather talk about what I’m looking forward to in the new year.

When it comes to the mother medium, I eagerly await the return of Bitch Planet, easily my favorite new series of 2015. Actually, I have yet to stop being pissed at Kelly Sue DeConnick and Valentine De Landro for having the audacity to take a vacation.

The third and final volume of the graphic novel series March, Congressman John Lewis, Andrew Aydin and Nate Powell story of the struggle for civil rights, is due out this coming year. If you haven’t read the first two books, you’ve got time to catch-up. This series carries my highest recommendation. By far.

DC and Marvel have retconned and rebooted and reimag

ined their respective universes to death, so it’s hard for me to show any enthusiasm for their upcoming projects. Why bother? They’ll only be retconned and rebooted and reimagined still again. Give me the stability and pure fun of Savage Dragon any day.

We’ve got lots and lots of comic book based movies and television coming up because Hollywood lives to run stuff into the ground. I can’t say that Superman v Batman or Civil War makes my pulse race – we’ve seen it before, and besides I have no reason to be optimistic about any Warner Bros. superhero flick. While I hope for the best, the comics movies that are putting the salt on my popcorn are Deadpool and Doctor Strange – which are two different movies.

Our pal Emily Whitten talked about the Deadpool flick in this space yesterday afternoon and backed up her enthusiasm with 32 links, so I don’t have to be repetitious. I will say that from the trailers and the hype this appears to be a movie that will either be a lot of fowl-mouthed fun and a much needed satirical jab at the form… or a complete disaster. I like both the character and the lead actor, and the campaign has been very amusing so I have reason to be optimistic. We can always use a good laugh. 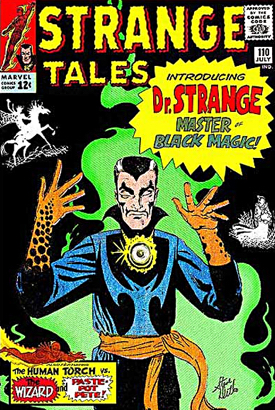 Doctor Strange has been one of my favorite characters since Lee and Ditko invented the psychedelic superhero way back when I was still (barely) a pre-teen. He’s never really been able to hold onto a title of his own, but he’s been a vital – even critical – part of the MCU for over a half-century. And casting Benedict Cumberbatch as the Sorcerer Supreme (which still sounds to me like a Baskin-Robbins flavor of the month) seems perfect.

As for comics-on-teevee, I’m looking forward to the return of Agent Carter because the first series was my favorite comics-based series on broadcast television. Hayley Atwell will also be reprising Peggy Carter in the Civil War movie, which is set in contemporary time. Peggy will be real old and nobody expects her to make it to the end-credits, but, of course, that doesn’t mean she won’t be in future flicks. It’s comics, folks.

What would I like to see in 2016? Hey, I’m glad you asked. I’d like to see a year of solid storytelling that does not reply upon overworked and overproduced “events” and variant covers (except those by Skottie Young) and phony deaths – in comics, that’s redundant – and astonishing resurrections. Honest, comic books are stories; let’s get back to good stories.

You know, the kind from which they make movies and teevee shows.

Have yourself a safe, productive and amazingly entertaining new year. You deserve it.