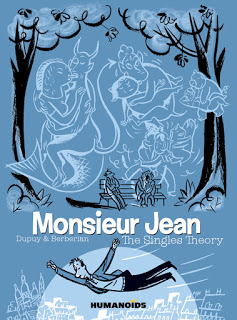 Monsieur Jean is the semi-autobiographical — a novelist rather than a cartoonist, and somewhat Everyman-ized — central character in a series of slice-of-life comics stories by the French creators Philippe Dupuy and Charles Berberian. Much of that series has been collected in English as From Bachelor to Father, after about half of it originally appeared over here as Get a Life. [1] (French albums are short, we must remember: to them, a full-length book-format comic is often just 48 pages. So American reprint projects typically stick at least two books together, and sometimes much more than that.)

, as far as I can tell, came out of sequence and out of size: it’s a 120-plus-page epic of mundanity, set between two of the earlier books, in a popular period of Jean’s life. It’s the story of how he got inspired to write his second novel — which anyone involved with the literary world know is the really tough one. (Anyone can write one novel, but for it to be a career and a life, a novelist has to be able to write number two — three and the rest will then follow.) I suspect this is a popular book in the series, since the US edition is a translation of a special duotone edition that came out in France in 2011.

All of the Monsieur Jean stories have love affairs — dating, meeting new people, sex, relationship troubles, and break-ups — as central to their plots, but Singles Theory uses that as the central conceit: Jean’s friend Felix, in the middle of a divorce, has moved in with him and has understandably soured on the entire idea of romance and love. At the same time, Jean is having recurring nightmares of armed men who claim they are about to kill him, but always get distracted long enough for Jean to wake up. His friends insist this is all about sex…probably because, in a book like this, everything is all about sex.

Those are some of the loose threads that wind through a series of discrete, individual stories about Jean and his friends — they go to a birthday party for a friend far our in the countryside, Jean is interviewed badly about his work, Felix gets trapped in an elevator, and so forth. It’s not for readers who want gigantic moments and lots of punching in their comics, but they’re very unlikely to pick up something called Monsieur Jean in the first place. For people who like movies and books that are about characters and dialogue rather than plot — who appreciate that things don’t always have to move at a breakneck pace — this is a wonderful story about real people in a real world.

[1] I’ve read Get a Life twice — most recently just a couple of months ago — and reviewed it in a quick, desultory fashion here each time. I won’t bother to link; you’re not missing anything. Slice-of-life stories are difficult to criticize/analyze.