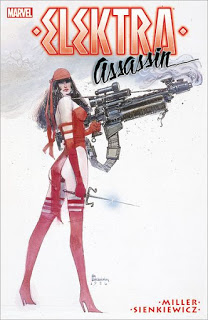 In the late ’80s, Elektra: Assassin

was possibly the very favorite comic of my brother and myself — he even bought an extra copy of the splash-page-filled climactic issue and covered a large portion of his ceiling with it. (I can still quote the important bit from memory: “And flesh/all flesh/will scream/and burn/and die” with the next page being the utterly perfect “and die/and die/and die/and die/and die.”

Does it hold up? Surprisingly well, actually. It uses some Marvel Universe furniture — SHIELD is important, with Nick Fury wandering through once or twice, and Daredevil shows up equally briefly in a flashback — but it’s really its own thing, a fever dream of politics and megadeath and violence and paranoia that’s set sometime that could be 1972 or 1986 or no year in particular. And for a book so over the top and full of grotesques, it’s got some of Miller’s most subtle writing — particularly impressive for those of us depressed at how Miller abandoned subtlety forever almost immediately afterward.

It’s set before Elektra’s death in Daredevil — probably. A presidential campaign is heating up, and a young, personable candidate (Ken Wind), who is a Democrat but never named as such, is winning over America with his sunny vision. Meanwhile, The President, who looks mostly like Nixon but could be Reagan if you squint hard enough, is paranoid and obsessed with nuclear war and his own machismo. And if you think you know which of those is a bigger threat to the world, you’re wrong. (This may be a hint of Miller’s later right-wing stridency, but it works perfectly in context.)

And in a small Latin American tin-pot dictatorship — propped up by SHIELD and the US more generally — a deeply mediocre and not overly intelligent SHIELD agent named Garrett is about to get in way over his head. The Beast — the supernatural being behind the secretive Hand organization of ninja — is trying to possess a human being, to further that plot I hinted at in the first paragraph. And Elektra is there to stop him, mostly by killing people in inventive and spectacular ways.

But Elektra is in over her head, too. She’s been captured and indoctrinated by the Hand at least twice, not to mention the time she just spent in a snake pit of a local insane asylum, and her fuzzy and confused mind is running almost entirely on instinct and pure willpower.

Unfortunately, Elektra and Garrett are the only ones who can save the world. From the Beast, and his dreams of megadeath. From Ken Wind. From the technological wizards of SHIELD’s ExTechOps division, and the cyborgs they create to chase the AWOL Garrett — including his ex-partner, Perry, who would have been a serial killer if he hadn’t found an easier, more legal way to kill lots of people.

Miller tells this story in the best example of ’80s style I know of, all stream-of-consciousness narrative captions from multiple points of view and overlapping screamed dialogue. He throws hints into the air to have them hit targets perfectly sixty pages later, and weaves it all together seamlessly. And this is Sienkiewicz at the height of his visual ambition, right before Stray Toasters, painting like a demon and shifting from photorealist to a child’s scrawl to slashes of color instantly to support Miller’s equally quick changes of mood. (I’ll also note that Archie Goodwin, one of the unsung heroes of comics, was the original editor, and I expect that he had a lot to do with making Elektra: Assassin as coherent and crisp and powerful as it is.)

Elektra: Assassin is a smart, fast-moving, overwhelming, psychological, all-encompassing thriller comic, set in the Marvel Universe but not of it, and a superhero story only by courtesy. It does things effortlessly on the page that are thrilling and amazing, and has amazing depths of subtlety for a book about a ninja-girl stopping a demon from blowing up the world. This is one major ’80s comic that completely holds up, and one of the real highlights of the careers of two hugely talented creators.