Yesterday I had the privilege of joining fellow ComicMixers Martha Thomases and Adriane Nash and a standing-room-only crowd at Columbia University to hear Congressman John R. Lewis talk about graphic novels. 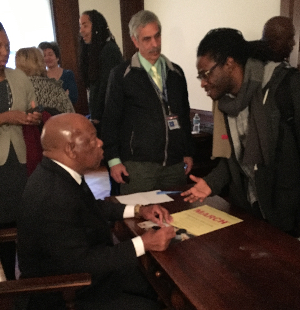 Make no mistake about it: Congressman Lewis is a genuine hero. I realize that’s a word we toss around rather lightly these days, but believe me, he is the real thing.  A recipient of the American Medal of Freedom, the highest honor we bestow upon civilians, Congressman Lewis was one of the original leaders of the 1960s civil rights movement. As such, he organized (with others, of course) the Freedom Riders, the civil rights march on Washington, the march from Selma to Montgomery Alabama, and a great many other actions that helped make real the concept of America to all Americans. A student and cohort of Dr. Martin Luther King Jr, he has been beaten, fire bombed, left for dead, and arrested over 40 times. He has talked the talk and walked the walk, and ours is a better nation for it. Far, far better.

Along with co-writer Andrew Aydin and artist Nate Powell, Congressman Lewis has produced the three volume graphic novel March. Please note the third volume, which is the longest of the trio, will be released this coming summer. We have reviewed March here at ComicMix. In fact, twice.

Congressman Lewis’s speech, joined by co-writer Aydin and hosted by comics legend Paul Levitz, was certainly about his life and his work. But it was equally about graphic novels and how ours is an important medium for the sharing of ideas – just ask Art Spiegelman. He also disclosed how he was inspired by a 1956 comic book that was edited by Dr. King, The Montgomery Story. You might want to check it out for yourself.

After the event, Adriane said we should have more non-fiction graphic novels. That’s a passion of mine as well, and I thank Congressman Lewis for making such future efforts significantly more feasible.

Of course, that’s towards the bottom of the list of things for which I thank this true hero. March is the story of America, and it is the story of a man who put his life on the line repeatedly to make America … America.

Of course we need more such heroes. But, basking in the inspiration from this great man, I am truly grateful we have Congressman John R. Lewis.