Print sales for the debut issue of Paper Girls were 75,000. That’s impressive. This accomplishment is even more impressive when you realize this story includes no capes, superheroes or zombies and was not published by Marvel or DC. But the more you understand the discerning appetite of Geek Culture; the more it makes sense. 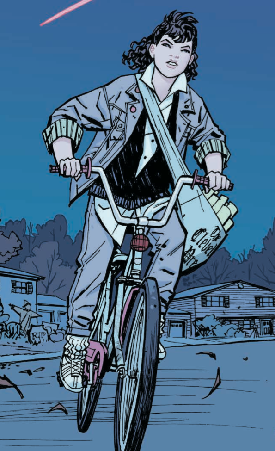 Although it’s one of the hottest comics right now, at first blush it’s an unlikely candidate for such strong sales. As a monthly comic that will soon be collected into a trade paperback, Paper Girls follows the exploits of four middle school girls in suburban Cleveland. Their part-time jobs are part of an old distribution model for an outdated form of mass media – delivery morning newspapers. The story is set in the wee hours after Halloween in 1988. But quickly it careens from the ordinary to a wildly intriguing thrill-ride.

Paper Girls is published by Image Comics, a publisher dedicated to helping creators bring their visions to life. Brian K. Vaughn is the writer and co-creator, and as his ongoing series Saga is such a huge hit, it makes sense that his fans would follow him to this new series.

But this series offers so much more – there’s 80s nostalgia, Matt Wilson’s brilliantly innovative coloring, unconventional protagonists (tough girls who smoke and swear) and this crazy, keep-the-reader-off-balance story. This is one of those stories where you kind of think you know where it’s going, but you quickly realize you have no idea. And then you think, “it’s ok not know what the hell is going on.” And maybe it’s even more fun that way too.

There’s something to that tried-and-true entrepreneurial idea of “offering value” too. The creators clearly are innovative small business people. The first issue had double the standard number of pages, but was still priced at $2.99, less than a standard Marvel or DC Comic.

But even beyond the moody story, the stark, deceivingly straightforward artwork from Cliff Chiang is a huge part of what makes this series enjoyable and masterful. Cliff’s a brilliant guy with an impressive background, but you need only enjoy his comics work – from Beware the Creeper to the more recent Wonder Woman – to know he’s a real pro at the peak of this game. 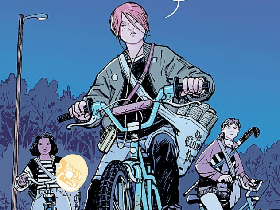 Even when he’s busy, Cliff is one of those guys who is affably professional – so much so that he almost seems like he’s a throwback to a more civilized age. As you have probably guessed, I recently caught up with Cliff Chiang to get his thoughts on the series.

Ed Catto: Paper Girls employs such a unique, fresh and clear voice, especially in contrast to not only other comics but other movies/books/TV Shows. Was that your intent and what are you, and writer Brian K. Vaughan, trying to accomplish?

Cliff Chiang: We wanted to tell a different kind of story, both personal and unpredictable (hopefully). The book definitely harkens to the ’80s adventure films we all loved as kids, but it’s not purely that. As the series progresses, we’ll show more of an adult perspective, too.

EC: It’s easy to tell that you push yourself with this book’s composition, characters and even jagged lifework. How do you approach new projects and did you approach this one differently?

CC: I try to imagine what the book needs visually and see what I can do to adapt to those needs. With Paper Girls, we’re seeing a lot of everyday life, which needs to be rendered in a style that’s a little looser and more evocative than usual. It needed a lot more personality, whereas in superhero books, you’re often just trying to make things look believable.

EC: There’s a real 80s nostalgia in this series. What was it like when you were growing up and what was your favorite part about the 80s?

CC: I think everyone’s somewhat nostalgic about his or her childhood, but I really wanted the book to feel authentic rather than a caricature of the ’80s. Being a latchkey kid, I remember having a lot of independence in those hours between the end of school and my mom coming home from work.

EC: What’s next for Paper Girls?

CC: We’ll get a glimpse of the larger conflict surrounding Stony Stream, and the girls wind up in some very strange places.

Paper Girls is available at your local comic shop and issue #3 will be on sale this Wednesday. Give it a try and I’d love to hear what you think.