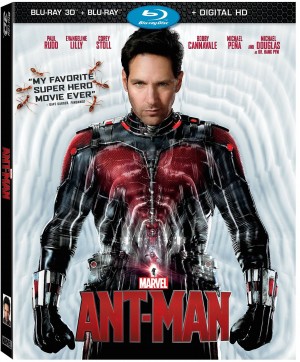 Marvel’s Ant-Man, which was an international box office smash this summer, is also a schizophrenic movie demonstrating the strengths and weaknesses of working within a shared universe. Where James Gunn was given a corner of the universe to play with the Guardians of the Galaxy allowing him to be cheeky and amusing while introducing cosmic threats that will dovetail in future films, Edgar Wright’s original ideas were too comedic and “out there” to fit in the terrestrial threads already in place.

Despite Wright working on this for years and coming close to bringing his vision to the Avengers’ world, it ultimately fell apart when too many compromises were demanded in order to fit in more closely with the tone and feel of those films. Wright walked and was replaced by director Peyton Reed, best known for the fresh-feeling Bring it On.

Reed did a more than serviceable job in bridging that gap, delivering an entertaining, at time thrilling, feature film that fits nicely within the evolving Marvel Cinematic Universe.  The film is now available for live-streaming via Disney Movies Anywhere and related services with the Blu-ray combo pack coming out December 8. 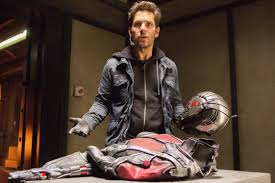 Paul Rudd is well cast as Scott Lang, a convicted criminal who is having difficulties reintegrating into society since most companies won’t give ex-cons a chance. He’s in a strained relationship with his wife Maggie (Judy Greer) and her new husband, a cop Paxton (Bobby Cannavale). Of course his young daughter Cassie (Abby Ryder Fortson) is the only one to see him as the hero he is.

Lang’s family issues and struggle for a fresh start lead us to his being lured into the home of Hank Pym (Michael Douglas), where we learn Pym has been keeping an eye on Lang, hoping to recruit him as an agent of change, helping him prevent his protégé, Darren Cross (Corey Stoll) from making some very bad choices. Of course there is the grief felt for the missing Janet Van Dyne, the Wasp, and the strain between father and daughter Hope (Evangeline Lilly) that is predictable but well-delivered. This thread is engaging, emotionally-packed, and very much the origin story of a hero.

Wright’s influence remains in the other half of the film, led by former cell mate Luis (Michael Peña) and assorted misfits. They provide a lot of the comic relief in the film but every time they are on screen, it feels like an entirely different film and this half does not satisfactorily mesh with the other half as we build to the climax. 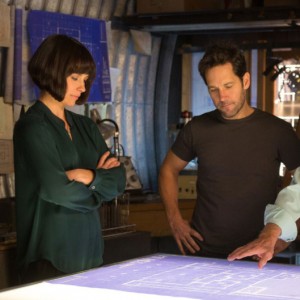 The “Marvelization” of Ant-Man is also evident in how many of the story beats between Pym and Cross are replicated from the Tony Stark and Obadiah Stane beats seen in the first Iron Man, right down to the Ant-Man versus Yellowjacket battle. What saves it, though, is the visual verve brought to the battle in Cassie’s room as we go from terrifying objects being hurled to a real scale vision of a toy train harmlessly smacking against a wall. Overall, it needed to be fresher.

Where the creative committee’s contributions are welcome is found in the opening scene showing a younger Hank Pym quitting his Ant-Man work for S.H.I.E.L.D. with Howard Stark (John Slattery) in place, fitting this in with the overall timeline. Also, Anthony Mackie’s lighthearted turn as the Falcon also established this as being a piece in the Avenger’s overall arc.

The visual effects are top-notch, giving the world of the Ant-Man and the microscopic world he finds himself trapped in are simply wonderful. So the various parts are largely fine, but taken together, creates an unevenness that ultimately disappoints. With luck, the recently announced Ant-Man and the Wasp sequel can find fresh ground to tread. 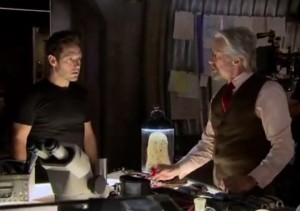 The Digital HD version reviewed looks great and sounds equally fine. Obviously, this deserves to be enjoyed on a big screen with a good sound system.

Not part of the digital streaming is Reed and Rudd’s audio commentary, which can be heard on disc.