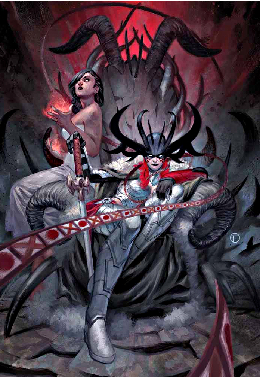 As promised in my last column, this week is about bi-erasure in comics. It’s come up too often as of late and deserves its own column rather than being crammed into an already dense essay on critiques of Iceman’s coming out. It’s a problem that extends beyond the comics themselves, and has reached the TV adaptations as well.

Before diving in, I want to make sure we’re all on the same page. Bi-erasure is varying levels of denying bisexuality truly exists, whether intentional or not. In comics, this manifests itself in rewriting bisexual characters as being straight or gay, having characters tell other characters they’re definitely just gay and not bisexual despite many decades being written as straight and refusing to even entertain the idea that maybe that character would be bi, using shapeshifters to skirt around the issue of bisexuality, and that’s just a few general examples.

Marvel has recently given us two examples: Hercules and Angela. Hercules, a historically bisexual demigod, will definitively be straight according to editor-in-chief Axel Alonso. He did address that Hercules was in a relationship with James Howlett in X-Treme X-Men at one point, but that was outside the main universe and doesn’t count.

With Angela, despite her being intimate with Sera in the first issue of Angela: Queen of Hel, Axel makes it a point that he doesn’t want to put any labels on these characters to let the readers decide. Angela’s actions with Sera make it clear to the reader that she is bisexual, pansexual, or possibly a lesbian. Sera herself is even considered a trans character at Marvel, as she was assigned male at birth. Her being an Angel of the tenth realm and not someone of earth makes me a little hesitant to consider her Marvel’s first trans superhero. Axel saying that Hercules is definitively straight, then saying with Angela he doesn’t want to put labels on these things within a couple of months of each other will make just about anyone scratch their head in wonder.

On a positive note, the director of the Deadpool movie has said that Deadpool will be depicted as openly pansexual. I’m cautiously optimistic about this. It could be great, or it could be using Deadpool’s pansexuality to make lazy homophobic jokes where the entire joke is it’s funny because he’s hitting on a guy! We’ll have to wait and see.

Over at DC, they’ve made some very positive strives towards bisexual representation. They’ll have four ongoing series with a bisexual lead: Harley Quinn, Poison Ivy, Catwoman, and Constantine: Hellblazer. Granted, all but Constantine are very recent revelations, but this is a great step forward. All the characters are fairly well known to general audiences, have had some suggestions in the past of their bisexuality, and now it’s just been confirmed. And with Constantine, since the latest reboot, his bisexuality has been more prevalent than ever.

On a negative note, one of the larger missteps in bi representation lately was NBC’s decision to make Constantine straight for their TV adaptation. From NBC’s perspective, Constantine’s bisexuality was rarely delved into in the comic, that it wasn’t important for the adaptation. This is probably one of the best/worst examples of bi-erasure as of late. Unlike Axel Alonso, the excuse of “That’s a different version of the character!” isn’t even viable here. It was NBC flat out stating they were perfectly aware of the character’s bisexuality, but it wasn’t important enough so it got nixed. That might not have been a factor in the show getting cancelled, but I’d be lying if I said there wasn’t something in all that happening that wasn’t at least kind of satisfying to see.

It’s easy to see how bi-erasure comes about. We live in a society where the end goal for most people is to find a partner to maintain a monogamous relationship with. When someone is coupled off in a monogamous relationship, others view you as being actively straight or gay. If you aren’t perceived as being actively with both men and women, it’s easier for people to assume you’re just one or the other, regardless of what you tell them.

Part of that also comes from the antiquated idea that gays and lesbians used the label of bisexual as a transitioning term, being unsure or afraid to commit to the labels of gay or lesbian. When I was a teenager I didn’t come out as gay at first, I came out to a few people as bi before identifying as gay. And to be entirely honest with you, bisexual, pansexual, or queer are probably more accurate labels for myself, despite being far on one end of that spectrum. Perhaps I’ve been unintentionally adding to bi-erasure. It’s something for me to think about. In the meantime, I’ve decided to update my bio here to queer rather than gay.

With more openly bi leads in comic books at the big two, we are starting to combat bi-erasure. However, it’s still rampant throughout comics because of the mentalities of some of the people working on them, even though it’s usually unintentional. If we’re going to push for an end of bi-erasure, we need to support books with openly bi leads, let them know about other bi characters we’d like to see more of, that we want more representation, and make our voices heard every single time the comic industry gets it wrong.