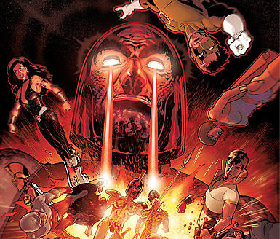 Barely a week ago, WWE World Champion Seth Rollins turned his knee into goo after botching a routine move. The Internet Wrestling Community was set on fire with speculation to the immediate future of the flagship of professional wrestling. And a few days later, the fire was doused with the reality of predictable corporate future endeavors. A tournament to crown the new king of the ring was announced (no, not the King of the Ring™… I’m being poetic, damnit), and the brackets were filled to the brim with rehashed match-ups.

To any savvy fan, the winner is already clear-cut. Worse than that, the obvious feuds they were building to were pre-populated into the tourney. It was the worst possible outcome following the worst possible injury to happen to the roster at the worst time.

What sucks the most though is what brings me here to my personal rant this week: the missed opportunities.

Too often, we fans of Geek Culture can’t see the forest for the trees. It’s inherent in our very nature to forget to enjoy the journey, not simply skip to – and then quickly judge – the outcome. Typically, I would have reached that catharsis after lambasting you, my cherished fans, with several iterations on that theme. Like This American Life, but less maudlin. To take a bit of my own medicine though, I’m going to play devil’s advocate; I’ll argue in favor of screwing the well-worn journey in lieu of an unguessable ending. Someone cue some lighting or something.

I listened to Marc Maron’s WTF Podcast this week, wherein he was able to confront Lorne Michaels as to why he didn’t get hired on at SNL back in 1996. Rather than dance around the subject for an hour or so and reach the eventual bittersweet climax as I’d anticipated, Maron flipped his own typical script to change the predictable outcome. Within seconds Maron let slip his big finale, and covered his missed opportunity so many years ago. The answer, predictable perhaps more to his audience to then himself, was a complicated mélange of half-explanations. Somewhere between network notes, the right stuff, or the right timing, Maron simply wasn’t the proper fit. Michaels danced around it a few times more throughout their nearly two-hour talk, but the larger arc to their conversation held true. With the predictable ending out of the way, the two men connected on a much deeper level. As a listener, I wasn’t on the edge of my seat awaiting the answer. Instead, I was relaxed as they were, and I thoroughly enjoyed their banter in the moment. For the first time in listening to his podcast (which I’ve been a fan of for about four years now), I truly felt the connection brewing between Maron and his guest. It was riveting.

So it was disappointing to come home to Vince McMahon’s machine, chugging to the same destination it was headed in, when the universe handed him the ability to remove the predictability his product has been plagued with for the last five years – save only for the time when Seth Rollins himself turned heel. Missing the opportunity to even fill a tournament bracket with a few honest-to-Rao underdogs could have been the shot to the arm the wrestling community has sought after since the conception of Stone Cold Steve Austin. It’s been over nearly two decades since we’ve heard “Austin 3:16 just whipped your ass!” and we’ve not seen a better moment since.

And don’t think I’ve forgotten our dearly beloved comic books, my friends. You see, part of my longstanding feud with purchasing weekly books has been inherently tied to the continual delivery of the same beats over and over. The missed opportunities for originality. When Swamp Thing crossed over with its sister title Animal Man, we got yet-another-epic where nothing-would-be-the-same-again, when in fact it’d been beat-for-beat the same crap I’d read in a million other books.

To make it worse, it forced extra issues into my subscription box, under the auspices of being a completest. Call me – like so many others in our brood – a completest. Fearing forever that the one issue we’ll miss will end up being Wonder Woman #219. Don’t get the reference? Google it.

Suffice to say that in the information age it’s hard to put one over on an audience. When BitTorrents, Wikipedia, and a DVR exist, fast-forwarding to the end is easier than ever. The only way to fight it then, is to stop taking us from point A to B. Start instead at C, backtrack to A, and end somewhere on Q. So long as it makes sense for the characters to have ended up where they needed to be in a believable way – under whatever accepted rules exist in their respective universe – then everyone wins in the end. If not? Well, you’ll end up like so many Matrix sequels, and back issues of Countdown to Final Crisis.

At the bottom of the discount bin, along side an unending ocean of missed opportunity.