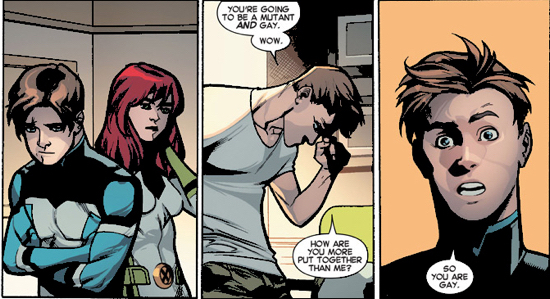 I’ve only been writing this column for a month now, and if you’ve been reading you might have guessed that the next opportunity I’d have I’d write about Iceman coming out in Uncanny X-Men #600. Well, congratulations! You were right. I’ll try to be less predictable in the future, but I make no promises.

As you may have heard, last week the present day Iceman came out to his past self, thus confirming that Iceman is gay in both past and present. This move has gotten a great deal of praise, with many highlighting that this now makes him the highest profile gay superhero in comics. Though I’m a big fan of the X-Men in addition to being gay, I honestly did not care much for how Iceman coming out was handled.

Now, before anyone reading this starts either rolling their eyes thinking I’m gearing up for a rant on how Brian Bendis and Axel Alonso must be homophobes or don’t understand diversity for not handling this how I would have liked, or are gearing up to rally with me on that point, I’m going to stop you there. Bendis himself is Jewish, and two of his three daughters are adopted, one African-American and the other Ethiopian. He co-created Miles Morales, the half African-American, half Hispanic Spider-Man that has since become a major hit at Marvel. Axel Alonso himself was editor on Peter Milligan and Mike Allred’s X-Force/X-Statix run that introduced three queer X characters. The issue I have here is not personal and I acknowledge that they have made great decisions regarding diversity in the past. It’s about the handling of Iceman’s coming out and how that affects LGBTQ representation at Marvel. Now let’s get into it.

First off, Jean Grey is here for seemingly little reason as past Iceman has his talk with present Iceman. She was my and many other people’s point of contention when this was first brought up in All New X-Men #40, when she outed him. Some people don’t feel that she outed him, but having read it, that’s the conclusion I came to myself. Telling someone what their sexuality is when they’re questioning it can be damaging. I know when I was a teenager and had people in my life telling me I wasn’t gay, that it did hurt me and took time to get over. When Jean did this, it took away from Iceman’s agency. Rather than a coming out story, we got a “Jean told us we’re gay, so we are now,” story, and that’s significantly less compelling. I wish I had the time to go into how troubling the bi-erasure was in this story as well, but I’ll talk about bi-erasure in mainstream comics next week.

Second, starting with the “You’re going to be a mutant and gay. Wow,” line that present Iceman says to past Iceman, and going into how he put all of his effort into the X-Men over his own happiness, I was just completely taken aback. This made no sense at all.

How can present Iceman talk about putting all his effort into the team when he has never led the X-Men, and he left the team to go to college for a bit, and he had a fairly long relationship with Opal Tanaka that he put his all into, going as far as heading to Japan with Jean Grey (funny, right?) to save her from Cyber Samurai, and he tried to ruin Polaris’ wedding to Havok because he was still into her, and has seen several other X-Men over the years come out around him even as mutant numbers dwindled… and that’s just to name a few things. Not to mention how Cyclops, Storm, Professor X, even Magneto all made time for their own happiness and had a much more important role in the world than Iceman ever did. It would be one thing if this was because present Iceman was being selfish, but he’s making it out like he stayed in the closet because he’s selfless, and that doesn’t quite hold up here.

Building on that point, Iceman being a blonde hair, blue eyed, young, white, attractive, able-bodied, cisgender man with a six-pack complaining about how hard it is to come out was disappointing. Look, everyone has problems and hardships, even young attractive white guys, and I understand and acknowledge that. However, this is a fictional world where Iceman has been on life and death missions, gone through space, time, fought aliens, vampires, deities… and coming out was harder than all of that?

If this was the 80s, I’d totally get that. Even the 90s. It’s 2015, and that coupled with living in such a fantastical world makes this too hard for me to swallow. Not to mention how many of his teammates and fellow mutants are not nearly as privileged as he is. I’d dare even say that Nightcrawler and Beast might have a harder time being straight than Iceman would have being gay.

Finally, on the last page of this scene young Iceman asks present Iceman if he thinks Angel is hot and they agree and have a good time about it. If you’re going to make the next LGBTQ X-Men character a young, attractive, blonde hair, blue eyed, able-bodied, cisgender white man with a six pack, can we at very least have him talk about being attracted to someone who isn’t also all of those things? It just feeds into so many of the negatives in the LGBTQ community that are trying to be addressed. It was a way to wrap up the scene that was clearly intended to be sweet that left me feeling sour.

I’m not trying to be ungrateful about having more representation in mainstream comics. However, we should be holding ourselves to a higher standard and demand more, better, and thoroughly thought out LGBTQ representation.

I do want to end on a positive note. Bendis has updated Iceman in a way that will give future writers something new to explore with the character and I’m thankful to him for that, and despite how I may have come across, I am eager to see what other writers will do with him. Hopefully an LGBTQ creator or an ally like Peter David or Kieron Gillen who handle queer characters respectfully will get to tackle him, and maybe I’ll soon be reading the greatest Iceman story ever told.