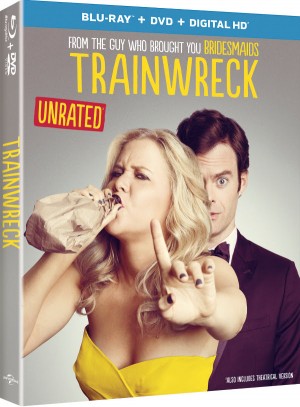 Amy Schumer has become quite the comedienne, taking the stage, television, and now film by storm. Trainwreck, her starring vehicle for director Judd Apatow, was my first sustained exposure to her and thought the fresh eyes could glean what the fuss is all about. Still trying to figure it out.

The story is about a woman who is professional star and a personal wreck who meets and falls for a guy, only to screw it up at much the same time she screws up her relationship with her sister, and loses her job. That it is about a woman and not a man has garnered a lot of buzz but the overall story is tired and predictable.

Apatow’s previous films have offered up fresh takes on old themes along with sharply delineated characters that avoid the clichés and bring with them a tremendous amount of heart. In The 40-Year-Old Virgin, Knocked Up, and This Is 40 were all written by him and perhaps he should have been allowed to give Schumer’s script a pass.

We’re told that Amy Townsend is the star writer for S’nuff, a magazine that makes Maxim and FHM seem tame. She is assigned to interview a sports doctor despite disliking athletics of all kinds. Her boss, Dianna (Tilda Swinton) holds out the Executive editor’s post as a carrot for taking on the work. Meantime, she is avoiding emotional entanglements, drinking, dancing, and having a series of one-night stands which seems to stem from words of advice given to her and her sister Kim (Brie Larson), by their crude father Gordon (Colin Quinn). On the other hand, she has a warm spot for dear old dad, now confined to a nursing home given his multiple sclerosis.

She finally seems to settling into a relationship with the musclebound and possibly closeted Steven (John Cena). Despite being rude and crude, he gets his heart broken when Steven discovers Amy has been sleeping around and tells her she’s not a nice person and honestly, she isn’t.

That starts to change when she beings to interview the near-perfect Aaron Conners (Bill Hader) and a softer side seems to emerge. Over a period of time, she falls for the doctor and they begin to date and she’s having her first genuine adult relationship. She doesn’t want to screw it up but of course does, triggered in part by her father’s sudden death. She spirals downward just as one would expect towards the end of Act Two.

Everything comes crashing down around her until she finally hits bottom and rebounds making amends first with Kim then with Aaron. Her final over-the-top act comes out of the blue and is intended to be a showstopper when it just stops. They still kiss and all will be well. Awww.

Amy and Aaron, though, are deeply under-developed characters and you are not emotionally invested in either nor is there real warmth and chemistry between the performers. In fact, Aaron seems more himself with his patients including LeBron James, who provides as adept with comedy as he is with a basketball, stealing every scene he’s in.

Schumer may be a gifted talent but it’s not on display her since Amy is unlikable, the humor is tame, and nothing feels new and different, just tired and by the numbers. None of the supporting characters feel fleshed out, spoiling a rich ensemble.

Universal Home Entertainment has released the film in a combo pack that includes Blu-ray, DVD, and Digital HD. Additionally, both discs come with the theatrical version and a four-minute longer unrated version. From what I can tell, there’s just more, nothing earth-shattering and special.

The film comes with a nice assortment of Special Features including additional Deleted and Extended Scenes; a two-part Gag Reel; Lin-o-Rama, where several actors are shown ad libbing for scenes; a traditional Behind-The-Scenes featurette; Directing Athletes: A Blood Sport , a more scripted than not look at working with James, Tony Romo, and Amar’e Stoudemire; The Dogwalker, the complete film-within-a-film starring Daniel Radcliffe and Marisa Tomei; and finally, from Comedy Central, the Trainwreck Comedy Tour Featurette.