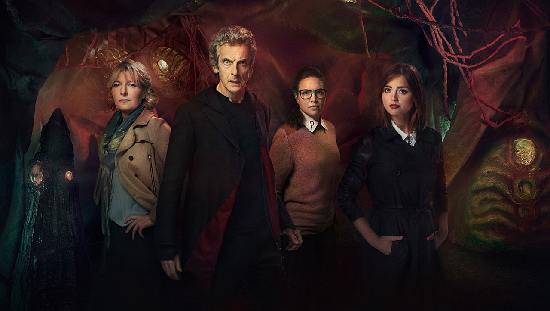 The Doctor: “How are you going to protect your glorious revolution from the next one?” • The Zygon Inversion • Doctor Who, Season 9, Episode 8 • Written by Peter Harkness and Steven Moffat

What the fuck is with all these fucking commercials!

I mean, seriously, I get that BBCAmerica wants its money’s worth out of Doctor Who, but c’mon, are you fucking kidding me? Ever since the passing of the TARDIS to Peter Capaldi, the commercial breaks have gotten absolutely fucking ridiculous – what is it down to now, every five minutes? And the breaks seem to be longer than the actual story in between the damn commercials!!!! How the hell can anyone actually enjoy the show?

Because of the stupid commercials, I missed so much of the nuances of both The Zygon Invasion (which first aired last week on October 31) and Saturday’s The Zygon Inversion that I watched them at one sitting today, Sunday, November 8, on Amazon Prime. Yeah, I paid $2.99 for each, because Season 9 is (not yet) part of my Amazon Prime membership, but it was worth every penny.

No, more than that…

In fact, im-absolu-fuckin-lutely-not-so-ho, this two-hour story will be the one that definitely defines Peter Capaldi’s ownership of the Doctor. His delivery on the futility of war was brilliant, combining pathos, hope, desperation, and even bits of humor. I was riveted, I couldn’t take my eyes off of him – and, in fact, I “rewound” those ten climatic minutes three times just so I could watch and listen to him again. Now, I do have to say that I was a bit “quibbled” last week when the show hit us all on the head with a very, very heavy hammer:

The Doctor: “This is a splinter group. The rest of the Zygons  –  the vast majority  –  they want to live in peace. You start bombing them, you’ll radicalize the lot. That’s exactly what the splinter group wants.”

Yes, yes, Steven Moffat and Peter Harness, we got the analogy – and if you didn’t get the analogy then I’m not talking to you – and perhaps you didn’t have to swing Mjolnir again when the “normalized” Zygon pleaded that he just wanted to live in peace before he killed himself. The best part of any science fiction, whether it be in book or television or movie form, imho, is when it addresses and/or attacks our real concerns, assumptions, and prejudices and, hopefully, makes us actually think about them.

The Doctor: “Listen, I just want you to think. Do you know what thinking is? It’s just a fancy word for changing your mind.”

But this is the real world, and it will take more than Peter Capaldi’s breathtaking performance and a great, great episode of Doctor Who to change the minds of radical “splinter groups” bent on war to realize that the box – both of them – is empty.

Even the Doctor has been through this 14 times before.