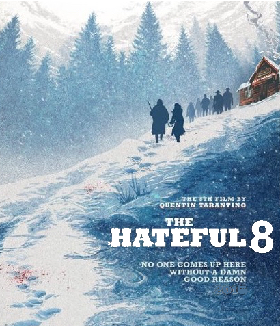 Watch out. I’m about to go political again.

Quentin Tarantino, one of our most popular heroic fantasy movie writer/directors, has pissed off the nation’s police community with police unions in Chicago, Houston, Los Angeles, New Jersey, New York and Philadelphia as well as the National Association of Police Organizations (NAPO) calling for a boycott of his work.

These sundry organizations were joined by Quentin’s own father, Tony Tarantino. “I love my son and have great respect for him as an artist but he is dead wrong in calling police officers, particularly in New York City where I grew up, murderers.” Wow, I guess Thanksgiving at the Tarantino house is going to be one fun-filled laugh epic.

According to the statement on NAPO’s website, “We ask officers to stop working special assignments or off-duty jobs, such as providing security, traffic control or technical advice for any of Tarantino’s projects … We need to send a loud and clear message that such hateful rhetoric against police officers is unacceptable.

“As a high profile figure, Tarantino’s language is utterly irresponsible, particularly at a time when the nation is seeing increasing and persistent calls for the killing of officers,” NAPO uttered. “Anti-police rhetoric like Tarantino’s threatens the safety of police and citizens alike. The police he is calling murderers are the same officers who were present along the protest route to ensure the safety of protesters, who provide security when he is filming, and who put their lives on the line to protect our communities day in and day out.”

Holy crap. What did Tarantino actually say? Maybe it was more the venue than the language. At the New York City Black Lives Matter rally on October 24, Tarantino discussed the recent horrific wave of killings of primarily unarmed young black people at the hands of our boys and girls in blue, many of which have been videotaped. What he said was “This is not being dealt with in any way at all. That’s why we are out here. If it was being dealt with, then these murdering cops would be in jail or at least be facing charges. When I see murders, I do not stand by. I have to call a murder a murder, and I have to call the murderers the murderers.”

Like most of us, Tarantino has seen the videos and he has expressed an informed opinion. He did not call for the blanket conviction of these officers; he asked that we treat police under such suspicion the same way we treat everybody else. Well, maybe not all white people, but that’s different topic. Note that the director did not say all police, or even any police committed these killings. But that’s not the only outright lie being told by the NAPO.

They also repeat the overworked meme that there’s a national conspiracy of individuals who are wantonly killing police officers. This is not true and, in fact, on-the-job slayings of cops is bordering on a 40-year low.

Sometimes people with shallow imaginations protesting these types of police actions compare the cops to Nazis (to which even Lenny Bruce responded “Nazis? I’m the mailman, motherfucker!”) But this reaction to those who stand up against police violence is right out of the Joseph Goebbels’ playbook. And just watch that sentence get taken out of context.

On the other hand, ever since the incidents in Ferguson Missouri early last August, many cops have been forced to wear television cameras to record their behavior. Because of this, many have cut back on their activities in protest. Because of that, crime has gone up in recent months. It’s as if the petulant police are saying “If you don’t let us do whatever we want, we’ll do nothing at all.” While staying on the public payroll, I might add.

Of course, these cameras cut both ways and can be – and have been – used to exonerate cops from bullshit complaints of police brutality. Nonetheless, police are sworn to uphold the law and the constitution, and that includes those troublesome provisions for freedom of expression and assembly. Historically, they’ve had a great many incidents of difficulty with this concept.

I’ll be at the opening of Tarantino’s next movie, The Hateful 8, in Manhattan on Christmas, the movie’s opening day. I don’t think I will be alone, but I do suspect I’ll be crossing a police picket line before I get my popcorn. The movie goes national the following week.

Quentin Tarantino did not call all cops murderers, nor did he call for the killing of cops. But there is sufficient evidence that a few are murderers and should be investigated.

By the way. As it turns out, Quentin Tarantino has not killed any unarmed black kids.