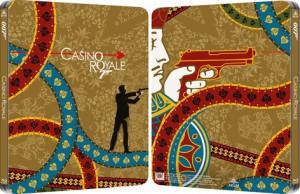 James Bond endures, with the 24th film, Spectre, scheduled to open November 6. The sinister organization has plagued 007 from the earliest films but have yet to rear their hoary heads in the current incarnation with Daniel Craig as Bond.

For those who are new to MI-6 and international espionage, Metro-Goldwyn-Mayer Studios (MGM) and Twentieth Century Fox Home Entertainment want you to come up to speed. To that end, they have released seven of the films in special edition Blu-rays, DVDs and collectible box-sets.

The Limited Edition Blu-ray Steelbooks spotlight the six films featuring the SPECTRE organization (From Russia With Love, Thunderball, You Only Live Twice, On Her Majesty’s Secret Service, Diamonds Are Forever, For Your Eyes Only) and the three recent features (Casino Royale, Quantum of Solace, Skyfall) each featuring packaging inspired by the films’ iconic opening title sequences.

For those who own these in some other high definition incarnation, you won’t need these. They contain the same special features although they do come with Digital HD codes.

The Steelbooks are solid, durable and visually attractive. Each one is distinctive just like their title sequences, carrying on the Maurice Binder tradition.

So, how do the films hold up? Sean Connery set the tone all others have attempted to match with varying degrees of success. The Cold War tensions infuse Russia along with some thrilling, authentic action sequences. A real sense of spectacle can be found on Thunderball, given all the aquatic Deering-do. Ernst Stavro Blofeld, played by a variety of actors, menaces Bond time and again but the worst may well be in On Her Majesty’s Secret service, the once-reviled George Lazenby vehicle. It is far better than its rep and packs an emotional wallop.

Roger Moore’s more erudite and comical Bond shows up in For Your Eyes Only and is among the best of his outings.

It is currently up to Craig to carry on the tradition and despite looking nothing like Ian Fleming’s prose descriptions, he brings the right danger and gravitas to the role as the franchise received an overdue freshening. The rebirth cycle took three films with Spectre tidying up loose ends.

If you don’t want the entire 23 films (and some are clearly lesser offerings), the Steelbooks are not a bad sampler to have.

If you missed Bond 50, there is also The Ultimate James Bond Collection features all 23 films together in one Blu-ray box-set, which includes a 24th space for Spectre. This one also offers “Everything or Nothing”, a 90-minute documentary on the untold story of 007 and a pocket-sized James Bond 50 Years of Movie Posters book including the best posters from Dr. No through to SPECTRE.  This collection will is exclusively available at Amazon.com.