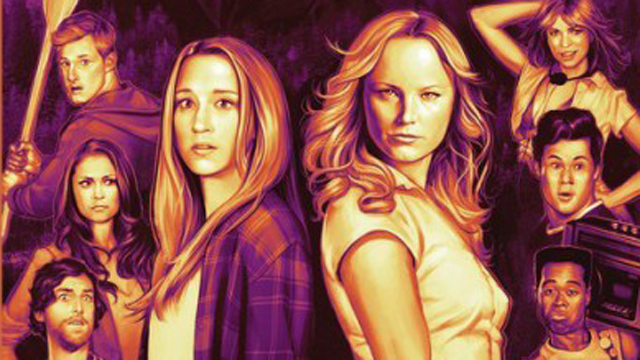 The Final Girls is a movie that came to a crossroad about what kind of movie it wanted to be, and instead of making the choice stayed at that point reading the signs until it wasted away. There’s a good madcap comedy in there spoofing the Friday the 13th series and slasher movies in general, but it feels a little superficial when you consider that horror parody has been a persistent genre over the last two decades. Likewise, there’s a good metaphor in here about getting over grief and moving on after the death of a loved one, and at times it feels like the film wants to be very powerful on this topic, but it only feels like it exists in the scenes specifically designed to deal with it. Without walking down either path quite far enough, we’re left with a journey that never feels complete.

There’s not a lot of new space to make jokes about slasher movies. Scream gave everyone a full rundown of many of the clichés, but the genre has been firmly entrenched in self-parody almost from the very beginning. To point out that there are specific character archetypes or that certain behaviors will often lead to character death isn’t clever anymore and it’s only fleetingly funny. The bits that do work usually work because one of the better actors is delivering the material. Adam DeVine is a transfixing comedic presence that makes bad jokes seem good and good jokes seem amazing. Alia Shawkat is similarly magnetic in her screen time and it’s unfortunate that her character seems to fade further and further in to the background as the movie progresses and it becomes clear that her relationship with the main character is not the important one.

The main character, Max, is perhaps the biggest source of my frustration. I’m not entirely clear if the problem is the part is underwritten or if Taissa Farmiga is just in a bit over her head, and it’s probably a little bit of both. Max is supposed to be consumed by grief, and while that might explain her tendency to drift through the events of the film it doesn’t make her feel like a compelling character. At the end of the film the only things I felt like I knew for sure about Max is that she was sad a lot, she has a crush on a boy, and she was capable of remembering a pop song from the 80s. Farmiga also feels like a less compelling screen presence than her co-stars, particularly Malin Akerman, DeVine, and Shawkat. More than anything else, the poor casting underscores that this is an indie movie, and is stuck in my craw as a great “what might have been” for the film.

I am probably being too harsh with The Final Girls, or at the very least underrating how pleasantly surprised I was that this wasn’t another horror movie parody that’s really about sex politics. I don’t mean that there isn’t a place for those kind of critiques, but I feel like they’ve been done to death and I’m a little tired of them from a narrative sense. Instead, The Final Girls is about grief and the struggles to move on from an important loss, and the decisions made around this theme are so much more clever than the jokes they string up to hold the plot segments apart. The looping events and paradoxical geography of the camp are something I’ve never seen used before to talk about the feelings one can get stuck in after the loss of a close family member. It felt so much fresher than some of the other stuff, and I wish that whoever made the choice thought that stuff was more interesting that another round of jokes about how alcohol is always around cursed campgrounds.