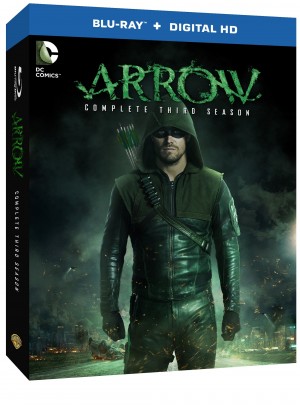 Arrow was the first serious approach to superheroics based on the DC Universe in quite some time. There was little risk picking a second tier character that some but not many may have known about. Producer Greg Berlanti assembled a team consisting of Marc Guggenheim and Andrew Kreisberg to sift through nearly 70 years of Green Arrow material and figure out how to turn it into a weekly series for the CW.

Once they figured out it was a story of redemption, of Oliver Queen’s journey from spoiled rich kid to a man avenging his father’s death and maturing into the man he was intended to be, they hit pay dirt. The series was rich with nods to the DCU and the adaptations from the source material served to make the show strong and fascinating.

They hit pay dirt with the casting of Stephen Amell as Queen but even better was the amazing chemistry he had with his supporting cast, notably Emily Bett Rickards, originally brought on for a bit role, but grew into the series’ heart and soul.

Season one was all about coming back to Starling City and Queen atoning for his sins and his alter ago, the Hood, reclaiming the metropolis. Season two was a journey towards becoming a hero as his support team grew, but the price that came with his newfound role was steep. Season three, out now on Blu-ray from Warner Home Video, was all about identity.

Across the 23 episodes, every member of the main cast had to reassess their role on the team, their connection to Queen, and their personal goals. We saw his kid sister Thea (Willa Holland) grow up, trained by her biological father, Malcolm Merlyn (John Barrowman), to become a capable fighter. We saw Sarah Lance (Caity Lotz) die in Merlyn’s game for power with his former liege, Ra’s al Ghul (Matt Nable), who had come calling to Starling City. Her death propelled her sister Laurel (Katie Cassidy) to stop her alcoholic spiral and train to become the new Canary, complete with sonic cry.

The season’s meta arc was Ra’s wanting Queen as his heir, to wed his daughter Nyssa (Katrina Law), and relocate to Nanda Parbat. The others had to protect the city while trying to help Queen. But there were many a distraction along the way. Queen Consolidated was bought out by Ray Palmer (Brandon Routh), renamed Palmer Technologies, and we watched the eager, affable Palmer build a suit of armor nicknamed A.T.O.M. to protect his city. More time was spent with the new spinoff series, Flash as members of that cast casually dropped by for teamups and shakes.

Additionally, there were side stories about Diggle (David Ramsey), his wife Lyla (Audrey Marie Anderson), and their Argus work which also involved the Suicide Squad.

As a result, things sprawled and grew diffuse, robbing Queen of the spotlight. His journey was constantly being obscured by everyone else’s. Even the main supporting team seemed to be losing screen time to other threads so across the season things were engaging but messy. What really hurt were the ludicrous flashbacks, taking Oliver Queen off his island exile and actually bringing him to Hong Kong and even a secret visit to Starling. If they are done with the island, maybe they should be done with the flashback device and move on.

By the end of the season, Arsenal (Colton Haynes) was gone, Laurel was accepted as the Black Canary and Thea suited up as Speedy. Palmer’s armor seemed to work better when he was miniaturized. And Merlyn is the new Ra’s al Ghul as his opponent Damian Darhk has set his sights on the ravaged Starling City – all of which sets up the new season beginning tonight.

The show has never looked stronger with terrific set designs for Nanda Parbat, sleeker, more appropriate costumes. The production and effects team deserve their kudos which come with some nice bonus material on the final disc

The high definition transfer is sharp and the sound good. The episodes are spread across four discs, each one with episode-specific deleted scenes. Disc four has a nice package of features starting with “Second Skins: Creating The Uniforms of Arrow”; “Nanda Parbat: Constructing The Villain’s Lair”; “The Man Beneath the Suit – Atom’s First Flight”; the ever-present Gag Reel, and the well-traveled Warner TV panel from 2014’s Comic-Con International (also found on several other releases this fall).