Yes, gaining great power brings with it great responsibility but that does not mean a character cannot revel in the sudden ability to do the seemingly impossible. After a decade of films with tortured protagonists, all in the name of gritty reality, the arrival of the CW’s The Flash series has garnered near universal praise because, for a change, the protagonist is having some fun. Out now from Warner Home Entertainment, The Flash: The Complete First Season is well worth having.

Grant Gustin makes for an appealing and engaging Barry Allen because he’s young and an unlikely hero, who is having fun running faster than the speed of sound. He’s a pumped, hyper-active puppy hero, eager to use his powers for as much good as possible, from helping paint buildings to rescuing stray animals. He wants to do it all and thinks he can.

Along the 22 episodes of the first season, he was coming to terms with the changes in his life from the fun to the tragic as his newfound abilities opened up new clues into the investigation of his mother’s murder when he was a young child.

Spinning off from Arrow, the new series worked hard to differentiate itself from the darker show. Still, it couldn’t entirely avoid the structure of a support team, all of whom know his true identity. Here’s he’s aided by Dr. Caitlin Snow (Danielle Panabaker) and the tech wiz uber-geek Cisco Ramon (Carlos Valdes).  Both work at S.T.A.R. Laboratories in the employ of Dr. Harrison Wells (Tom Cavanagh), who was the catalyst for accident that resulted in Barry gaining super speed. Wells is more than he seems from the outset and with every episode another layer is peeled away, a far more successful rolling out of a Big Bad than Arrow managed in three seasons. 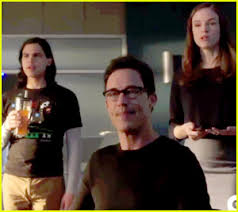 Barry also has a home team in the form of Detective Joe West (Jesse L. Martin), who took the young Barry in after his father, Henry (John Wesley Shipp), was arrested and jailed for the murder of his wife. As a result, he grew up with Iris West (Candace Patton) as a sister, someone he had fallen for although she fell, instead, for dad’s partner Eddie Thawne (Rick Cosnett).

From the outset, comic book fans had familiar names and all served as trigger warnings to future events, some of which will occur in season two, launching this week. The winks and nods are nicely handled and not overdone. They are there for a reason, and unlike in Gotham, they modify not ignore the source material. This includes Caitlin’s lover, Ronnie Raymond, who seemingly died in the same accident but actually merged with Prof. Martin Stein (Victor Garber) to form Firestorm.
If there’s a fault to the first season is that they have too many characters introduced, some dispatched with speed such as Simon Stagg (William Sadler), and others arriving and going without much consequence such as Dr. Tina McGee (Amanda Pays). Rather than focus on Barry and the Flash persona, time is given over to the development of Firestorm and later the Atom (Brandon Routh). And while its fun seeing the two series casts interact with ease, it again takes time away from developing the supporting cast. While we know something of Cisco’s past, Caitlin is fun but underdeveloped, which made “Who Is Harrison Wells?” such a fun turn for the actress.

The rogues, especially Captain Cold (Wentworth Miller) are resonant from the four-color pages but Cold in particular has a nicely developing persona and

relationship with the Flash. Tying Girder (Greg Finley) to Barry’s past was also nicely done.
It’s a wonderfully, satisfying and strong debut season and listening to the production team discuss it on the bonus material shows the level of detail brought to the plots and effects. The first season is spread across four Blu-ray discs, each containing some deleted scenes, some of which I wish made to air.
There’s also enlightening commentary from executive producers Greg Berlanti and Andrew Kreisberg, and DC Chief Creative Officer Geoff Johns on Disc 1’s “Pilot”.

In addition to the deleted scenes, there are several nice special features such as Disc 3’s “Behind the Story: The Trickster Returns!” (8:39), exploring Mark Hamill’s return to his character of The Trickster and what went into the episode.

On Disc 4, there’s “The Fastest Man Alive” (30:39) exploring the process of going from four-color comic to network series. There’s a lot of interesting tidbits in this one. Mostly for fans of special effects, “Creating the Blur: The VFX of ‘The Flash'” (26:25). A nice bonus is “The Chemistry of Emily and Grant” (4:20), the test footage between Grant Gustin and Arrow’s Emily Bett Rickards. Repurposed across multiple episode sets is “DC Comics Night at Comic-Con 2014” (29:31). Finally, there’s the usual Gag Reel (8:24).