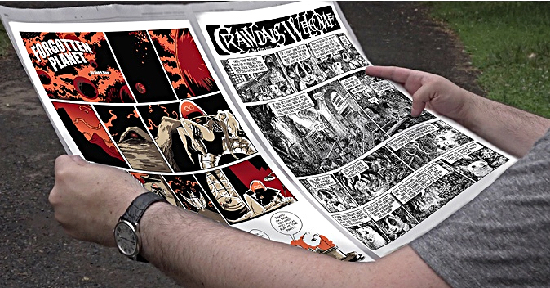 Getting old isn’t for quitters. I’m just back from Baltimore Comic-Con which is a lovely show in my time zone and I was chauffeured back and forth door to door by the lovely and talented Glenn Hauman and even in these non-stressful circumstances I’m exhausted.

Baltimore Comic-Con is, as I said, a lovely show. For one thing, it is almost entirely about comics. Yes, there are media stars signing autographs. There are dealers selling things that are not comic books (including some great jewelry that I wish I had a chance to eyeball more) but they are on the fringes.

Comics are among the few mass media to have a heart and soul. Because they can be produced on (relatively) small budgets compared to movies television and popular music and because the profit potential is (relatively) small they attract creators with more personal passion than greed. Yes, we can alcove up with our own list of exceptions but I’ll stand my my statement as a generality.

ComicMix shared a very large space with Insight Studios and The Sunday Comics. I’ve known Marc Hempel and Mark Wheatley of Insight for more than 25 years, longer than the Sunday Comics crew has been alive. I enjoyed standing around mouthing off to my old friends. I loved loved loved! watching the new kids show off their big beautiful paper comics to new readers.

Speaking of heart and soul I kvelled like the Jewish mother I am watching Vivek Tiwary host the Harvey Awards. Vivek is relatively new to comics as a creator and he reminds me every time I see him of the simple joy I feel when I get a good story in a four-color cover.

This was only the second time I’ve attended the Harvey Awards presentation and I have to say sitting in that banquet room at the Hyatt I felt very much like I was attending a family celebration. It wasn’t a wedding or a bat mitzvah but it had that same combination of vague bitchiness but overwhelming love that (my) family celebrations have. Instead of DNA the comics business shares a love of graphic story-telling as well as a sense of ourselves of outsiders.

It’s a beautiful thing. Even if I didn’t get to see Dean Haspiel without his shirt on.

On a completely different note I enjoyed the first episode of The Daily Show with Trevor Noah. It wasn’t perfect and it wasn’t Jon Stewart whom I’ve adored since before he got that gig but I like the new host and I like that he has a different perspective than I do.

It’s fun to watch a show where the host appreciates indoor toilets.