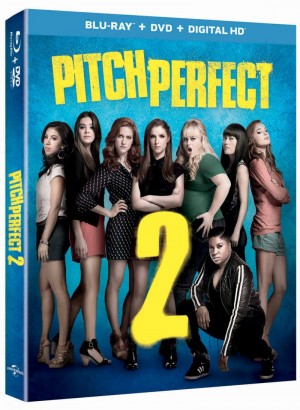 Pitch Perfect snuck up on us as a charming, funny film that took the national interest in all things acapella and grafted it onto the teen Coming of Age story template from Bring it On. With a strong ensemble and winning soundtrack, it wowed at the box office, making a singing star of Anna Kendrick, and ensuring there’d be a sequel.

If the film had any fault it was that some elements were so outsized they seemed incongruous with the rest of the story, such as the force and volume of Anna Camp’s projectile vomiting or Renee Wilson’s super-sized characterization.

Unfortunately, the trend towards bigger and more preposterous elements plagues Pitch Perfect 2, out now on Blu-ray Combo Pack from Universal Home Entertainment. At a performance before President Obama, Fat Amy has a wardrobe malfunction that gets televised but the reaction is far more extreme than Janet Jackson’s real life exposure during the far better watched Super Bowl.

As a result, the Barden Bellas are now pariahs both on campus and in the acapella competition world. Of course, there’s a loophole which they exploit so the disgraced national champions prepare to compete in the International Competition against a German team that works with stereotypical efficiency. They are the goliaths to beat and we all know they will be taken down a notch with heart and soul.

The film barely pauses to introduce the full Bella squadron so few actually feel like characters as opposed to window dressing. Instead, we focus on Kendrick’s character, who has over the last three years become the leader. But, she wants more and secretly takes an internship at a recording company where she faces new challenges, shaking her from her mash-up comfort zone.

Impossibly, the Bellas are all seniors so graduation looms and until a freshman arrives to join the team, there is little thinking about continuing their legacy or domination. But legacy becomes an undercurrent as Emily (Hailee Steinfeld), daughter of a former Bella (Katy Segal) forces her way into the group. Being the younger outsider does for this film what Kendrick’s Beca did in the first and she is utterly charming in her innocence. 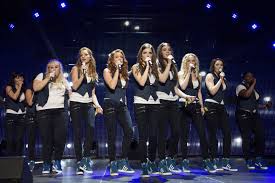 The broad humor does not work for me at all, as I prefer the subtler, funnier bits such as Kendrick’s fascination with her German rival Kommissar (Birgitte Hjort-Sørensen). Or the clearly ad-libbed and inappropriate comments from podcasters

The team’s antics reach a nadir with a senior home performance so they go to seek their mojo from Camp’s Aubrey, now a motivational guru. Cohesive once more, they work hard for worlds and win (not a spoiler) and their performance is all you want from this film.

A third installment is in the works and one hopes that the transition to a mostly-new Bellas will bring with it a downshift in tone so they avoid embarrassing themselves.

The digital transfer is just fine with an excellent 1080p transfer matched with the more important DTS-HD Master Audio 5.1 lossless soundtrack that makes the songs pop. 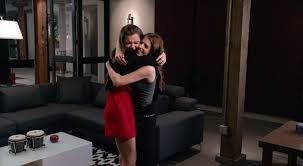 There is additional Audio Commentary from Director/Producer Elizabeth Banks and Producers Paul Brooks and Max Handelman which actually tells you more about the film’s production than all of the above.