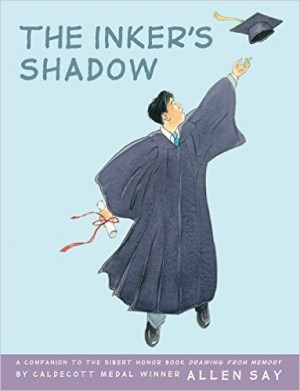 Growing up a Japanese youth during World War II must have been a dizzying time and rich with memories and material for narratives. Allen Say has been mining those remembrances in a series of graphic memoirs, the latest of which is out from Scholastic. The Inker’s Shadow picks up from his The Ink-Keeper’s Apprentice which was released in 1994.

Say was born in 1937 as Japanese aggression was at its height and was the product of a Japanese-American mother and Korean father. Four years after his parents divorced, he apprenticed himself to cartoonist, Noro Shinpei, who became his “spiritual father:” When his real father remarried and started a second family, he moved to the United States and invited Say to join him.

Being a Japanese teen in California less than a decade after the end of World War II brought with it prejudices and tensions that complicated Say’s assimilation to his new home. Here’s where this volume picks up and we see him struggle to make friends, learn English, and continue to develop his art. There was an initial, disastrous experience in military school His father’s inattention did little to help and Say struggled.

His pages mix prose, illustration, and graphic storytelling seamlessly, carrying the reader through these trying experiences. We see close-minded adults, arrogant, privileged children, and the first true friends Say made in the United States. There’s a poignant moment toward the end as Say prepares to take a girl to the prom only to have his heart crushed.

Still, Say’s perseverance sees him through to his high school graduation and as the book concludes, one chapter closes and we see him on his way.

Overall, this provides a unique view into the immigrant experience at a particular point in American life, just as the Cold War was gripping the country’s psyche and conformity was becoming the watchword of the decade. Say’s individuality is challenged time and again but through his art and work ethic, we watch him gain confidence and skill, putting him on a path that has seen him win the coveted Caldecott Medal, Boston Globe/Horn Book Award, and ALA Notable Book and Best Book for Young Adults.