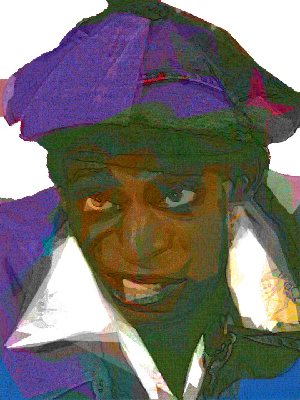 It’s been suggested my sense of humor can be silly, risky, risqué, downright ghetto and (on rare days) intelligent. Sure, I’ll buy that. It’s fair.

What exactly ghetto humor is depends on where you’re from, what you meant and who will laugh. I assure you, when I inject humor on a subject somebody somewhere is laughing. It may not be you or your circle of friends and family, but someone gets the joke.

The audience I’m aiming at gets it more times than not. I’m not interested in what those outside that audience think and that’s often the problem for some. The same goes for the matter-of-fact blunt way I speak my mind.  I’m often told my profanity is something I should work on.

I get it. I say and write things not funny to some people who also feel expressing myself without vulgarity is the way I should go. I’m from the hood. The hood took half of my family out. It was only by the grace of God and my mother Jean Davis, the inspiration for Static’s mom Jean Hawkins, that I made it out of the hood. My sister, Sharon Davis, the inspiration for Static’s sister Sharon Hawkins did not make it out and neither did my grandmother.

I still got a bit of a hood in me and will keep that bit in me till I die. I only go buck wild when it’s challenged in such a manner I feel it’s appropriate to let the other party know just who they are dealing with.

Making the rumor rounds now as to why I’m not with Milestone 2.0 are these two never failing Michael Davis major flaws – I’m too loud and brash to be a role model and those failings make me a business risk. The word is there is no place within the black household I’d be welcome and no one in business looking to invest some serious funding would ever consider me. I simply could not be vetted.

Simon and Schuster, one of the worlds biggest and most successful publishers, must have relied on Huggy Bear for my background information, because word on the street is they gave me my own imprint, the Action Files, which incidentally has been in the schools for 20+ years. What a massive screw up that must have been. To give me my own imprint and continue to publish the high interest, low level, conflict resolution comic book reading program I created for over 20 years.

Pearson Learning, perhaps the biggest educational publishing company in the world, must have jumped on that Huggy Bear bullshit also and then somehow they sucked in the world’s most powerhouse retailor because for the last couple of years you can get the books without the lesson plans and teachers guide on Amazon.

I’m still very much involved in the education market, co-venturing on series for the US Army and testing giant A.C.T among others. My new imprint Level Next published by Simon and Schuster and Karen Hunter Publishing will launch in 2016. The Guardian Line, a line of faith based comics I created distributed by mega publisher Urban Ministries Inc., the most powerful media company in the African-American home and church space, is celebrating its 10th year. I’m hard at work on the second wave universe, also for release in 2016.  I’m also in the music space producing groundbreaking projects with Hidden Beach Records, Wu Tang and Neyo.

When talking about levels and what is needed to be vetted at those higher levels I’m at a real lost. It simply cannot be that Simon Schuster, Urban Ministries, Pearson Learning, and quite few more (all I’m still in business with) are not good enough. No way the Black home and church, education and the music market isn’t big enough. So, whatever can be the basis for the new wave of reasons I’m not with Milestone 2.0? Must be the role model thing.

Funny, Bad Boy Studios, my self-funded completely free to students mentor program, has been recognized with proclamations from over a dozen cites. Mentor Magazine named me Mentor of the Year, and the Gordon Parks Academy is home to The Michael Davis Auditorium.

There’s a lot more, but what’s the point? What I’ve listed is more than enough to get me vetted anywhere. Anywhere except a place where my assets and attitude were once invaluable is now somehow invalid.

Word on the street is that’s all fucked up.