Martha Thomases: Did Someone Call You Schnorrer? 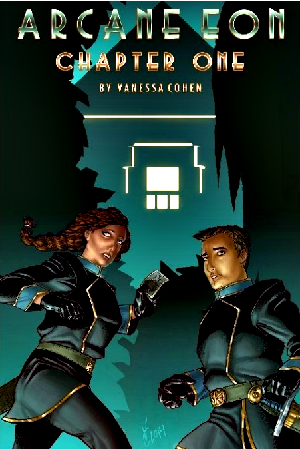 Forgive me, but this Jewish mother is about to kvell. For those of you goyim who don’t know what that means, this is the definition from the link (which will also tell you what goyim actually means):

“Kvell: To beam with pride and pleasure, Jewish parents are prone to kvell over their children’s achievements. “

However, this time I’m not going to laud my son, the genius, although I could do that every day all day. No, this time I’m going to tell you about Vanessa Cohen, and her web-series, Arcane Eon.

I met Vanessa at a Manhattan playground when she and my son were both toddlers. They stayed friends throughout the years, through puberty and different schools. They shared not only a New York childhood, but a love of comics and cartoons and video games that meant there were always new things to talk about.

When I worked at DC, I would take Vanessa on Take Our Daughters to Work Day. She saw how comic books were put together, met editors and artists and writers and production staff.

And now, she’s published the first chapter of her series. Cohen has done the whole shebang – writing, drawing, coloring and lettering.

It’s a mystery in a universe where there are detectives who are expert in magic as well as forensics. A detective has gone missing, and when two of his colleagues come to town to investigate, they can’t get a straight answer out of anyone. Are there ghosts? Are there monsters? What’s going on in that mansion on the island?

Vanessa’s story-telling is fast-moving and easy to read. She likes steep camera angles, which adds to the moodiness of her mystery. The characters are distinct and real, with a refreshing combination of body types and colors.

I confess that there were a few places where I had trouble following the story, but I caught up, usually within a few panels. And I might like a few rays of sunshine in the coloring, if only to contrast with the gloom in the mansion. These are the same issues I have with a bunch of Vertigo series.

Check it out. She publishes a new page on her web-site every Monday, so you can catch up quickly if you don’t want to shell out the money for a hard copy.

But buy the book. Otherwise, we’ll all find out what a schnorrer you are.