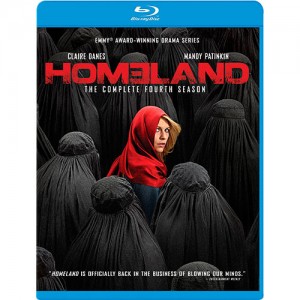 Homeland has been a strong drama series that has tackled timely issues mixed with interesting personal drama. However, its third season meandered a bit so it was refreshing to see the fourth go round return to stronger, more dynamic storytelling. With the Nicholas Brody (and his family) thread now neatly snipped off, the focus has returned to driven, flawed Carrie Mathison (Claire Danes) and the shadowy world of espionage.

Homeland The Complete Fourth Season is now out on a three disc Blu-ray set from 20th Century Home Entertainment. The revitalized series picks up with Carrie now in Kabul as a station chief, using reliable intelligence fed to her from a resource to target terrorists and take them out. That is, until one attack destroys a civilian home, amidst a wedding celebration no less. The target escapes and the groom has also survived and becomes the fulcrum upon which the season’s major arc revolves.

Carrie is a great field operative but not much of a station chief, barking orders and doing nothing to build relationships with her team. Life in Afghanistan is busy enough but things change when Pakistan chief Sandy Bachman (Corey Stoll) uses bad intel that results in a civilian home being destroyed. When Bachman is attacked on the streets and killed in a retaliatory action for bombing the house, a guilty Carrie gets involved in the investigation, forcing her way into becoming his replacement where she repeats her bad management and lack of trust. This means that rather than trusting and using her team, she winds up working with those form her past including Saul Berenson (Mandy Patinkin), who has his own issues with Dar Adal (F. Murray Abraham), Fara Sherazi (Nazanin Boniadi), and of course the enigmatic Peter Quinn (Rupert Friend). In fact, Quinn’s story arc this season started off strong and petered out once he was caught up in Carrie’s magnetic pull.

There’s a lot of plotting, moves, and countermoves but it all builds to Saul getting kidnapped and his attempts at escape while target/Taliban leader Haissam Haqqani (Numan Acar) is executing his own plot to infiltrate the CIA base and extract its secrets. The pacing is tight and builds to a nice crescendo in the final episodes as everything comes together. The larger issues reflect the contentious relationships in Afghanistan, Pakistan, and those who resettled from those lands in America along with how American diplomats have to tread a fine line between frenemies. Carrie may also have met her match in Aasar Khan (Raza Jaffrey), Pakistan’s counter-terrorism expert.

There prices to be paid all around as allies die and Carrie is made to feel guilty for not being in America to raise her child. However, once the dust settles, Carrie comes home and even reconciles with her mother while Quinn is off on a dangerous mission that apparently does not set up the soon to launch season five. But it does leave Carrie and Saul far apart, which is a shame since they work so well together. But trust and friendship remain collateral damage in the very dangerous game they play.

The high definition AVC encoded 1080p transfer in 1.78:1 is perfectly fine as is the lossless DTS-HD Master Audio 5.1 track. There aren’t many special features to entice you and they are fairly perfunctory. You have a few nonessential Deleted Scenes (10:52), Character Profiles (16:56) featuring Peter Quinn, Aasar Khan and Fara Sherazi; and, From Script to Screen (23:17), the most unique feature.