Ed Catto: No More Shh-ing in the Library 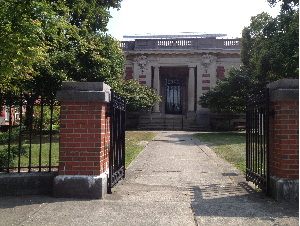 If you’re passionate about Geek Culture, you probably should (1) promote it by bringing new people into the fold, and (2) prune your collection to keep it robust and manageable. I’m typically pretty good at the first and pretty bad at the second. But last weekend I tried something new and I had an experience that was better than expected.

First, a little background. I grew up in Auburn, a small town in New York State’s Finger Lakes region. I was surrounded by about a million Italian relatives, a downtown that could have been the basis for Smallville, and an outstanding library. It was called the Seymour Library and was built around the turn of century by the firm of Carrere and Hastings. You may know them from another one of their works – the New York Public Library.

My mom led us on weekly excursions to return and borrow books. She’d choose a bunch from the new fiction/mystery section, read the best one or two, and then repeat the process the following week. Likewise, my brother and I would do the same in the children’s section. I’d shift my focus from time to time. I’d be interested in Hardy Boys books for a while, then Robin Hood books (he was big back then), then sports books (Matt Christopher was a favorite) and then dinosaur books. Always dinosaur books, in fact.

After I had checked out every dinosaur book in the children’s section at least once, I got a little pushy. I boldly told our beloved librarian, Mrs. Pine, that she needed to get more dinosaur books. I was a bit of a brat, eh? 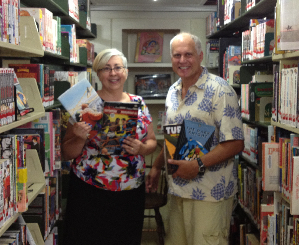 But my real passion was comics. Back then, there were only a few books about comics. To me that universe was confined to Jules Feiffer’s The Great Comic Book Heroes, Batman from the 30’s to the 70’s (and the Superman companion book) and Les Daniels’ Comix: A History of Comic Books in America. One other one, All In Color for a Dime by Don Thompson and Dick Lupoff, was like Bigfoot/ I just knew it was out there but never saw it.

So, flash forward to 2015. I’m a guy with overgrown collections of comics and books about comics. It’s time to prune those collections. And I thought my hometown library might be good pass along some of these books.

My Aunt Marcia, a well-read and supportive relative, introduced me to Lisa Carr, who is now the Library’s Director. She’s the energetic type that makes you realize how far libraries have come. I can’t imagine her ever shh-ing anyone in Seymour Library.

She’s all about creating excitement and addressing the ever-changing needs of her community. I explained that I’d like to make a donation of comic related books and graphic novels. She was both excited and gracious.

Lisa, and her staff, welcomed me with open arms (literally) as I brought my donation into the library. We chatted about Batman and Raina Telgemeier and how things had changed over the years. She then showed me the graphic novel section that they had built and I was so impressed. I checked out IDW’s The Outfit by Darwyn Cooke for my dad, in fact.

One of the other librarians explained that the character Nightwing was her favorite. My eight year-old self would never have believed that one day I’d be talking about Nightwing, essentially a grown-up Robin, to an authority figure in the library. It’s amazing how far Geek Culture has come.

So, a nice little chunk of my collection now resides in the Seymour Library Graphic Novel section. It was a great experience for me and I’d encourage any fellow hoarders collectors out there to consider the benefits of donating. Mrs. Pine, that wonderful librarian who fanned the flames of my passion for reading all those years ago, would be pleased to know that each of my donated books will have a special bookplate with a dedication to her.

And I think they have plenty of dinosaur books now too. I can’t really help with that.