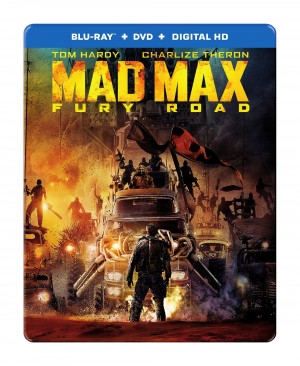 Before post-apocalyptic fiction became in vogue, there was always a work or two that captured the imagination. From Cormac McCarthy’s The Road to Margaret Atwood’s The Handmaiden’s Tale there have been stories to challenge society. But few packed the visceral punch of the visuals Australian director George Miller brought to his bleak world in 1979’s Mad Max. It set a standard rarely surpassed and introduced us to the talent of Mel Gibson. The modest film found an international audience so Miller was able to revisit the world on a somewhat larger scale in 1982’s The Road Warrior. And that found an even more eager audience so Hollywood threw money at him and we got the somewhat over-the-top Beyond Thunderdome.

Miller has wanted to look back at that society and has spent the last three decades attempting to mount such a production but fate was unkind to him. Meanwhile, contemporary fiction and filmed entertainment caught up to him so dystopia is as common as the soap opera. Audiences were therefore a little cautious when they settled into their seats to see Mad Max: Fury Road. As you may have seen for yourself or heard, he was more than up for the challenge, as was Thomas Hardy, the new Max.

Max has lost everything and like many a good protagonist, he wanders the wasteland, a restless spirit. His chance encounters ignite the stories much as the orphaned children took him to Thunderdome, here his capture by a savage society led him to Imperator Furiosa (Charlize Theron). For all the heroics Max display here, this is truly Furiosa’s film and she has made an indelible impression on audiences around the world. 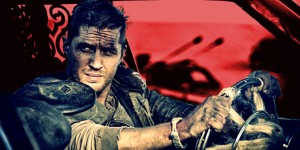 The film, out now on Digital HD and coming to disc Tuesday from Warner Home Entertainment, is well worth a look. While there isn’t an overly complex story don’t think there isn’t a story or a message in this high-octane chase. By the time Max finds her, she has stolen five women known as the Breeders, from Immortal Joe (Hugh Keays-Byrne), who has kept them in sexual bondage, seeking to generate male heirs to inherit his brutal control over the masses. She has The Splendid Angharad (Rosie Huntington-Whiteley), Toast the Knowing (Zoë Kravitz), Capable (Riley Keough), Cheedo the Fragile (Courtney Eaton) and The Dag (Abbey Lee) aboard an amazing machine and is taking them to the only safe place she knows, the land where she was raised. 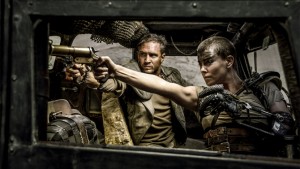 While it’s her story, we see it from Max’s point of view, and are privy only to his thoughts. Still, Furiosa ignites the story and is active rather than reactive, something that has been debated online since the film opened in June. She has been savaged and has lost an arm, but has not lost her wits and when the opportunity presented itself, she took the women, robbing Joe of his destiny. He wants them back and the chase is on as one truck is followed by dozens of the most imaginative motor vehicles captured onscreen.

Max has been taken by Nux (Nicholas Hoult), one of the white-painted war boys, the Citadel’s armed forces. He’s strapped to the front of Nux’s vehicle and over the course of the story, once Max gets free, he exerts a quiet influence over Nux, who finds his soul, and first love, while risking his life to eventually protect the Breeders.

Miller co-wrote the film with Brendan McCarthy and Nico Lathouris and touch on many aspects of heroes, villains, sacrifice, and the greater good. Although little of their writing is found in the finished film, you can learn from the extras how every character and vehicle had a name and distinctive background. Miller can tell you more about Immortal Joe or Coma Doof Warrior (the flame throwing guitar guy) than you can infer from onscreen, but it certainly helped inform the performances. And it clearly helped Margaret Sixel (Miller’s wife) edit the reported 450 hours of footage into an entertaining story. 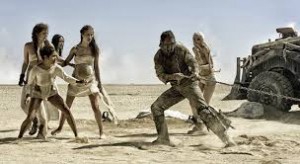 uriosa wants the women safe in The Green Place, even if it costs her her life. Max and Furiosa find themselves reluctant allies and little personal is shared between them, but there are volumes said between glances from Hardy and Theron. As they come to trust their lives and their precious cargo with one another, we get new glimpses of how harsh life on Earth has become, with rival factions, fragile alliances, and few places that can be considered safe refuges. There’s little hope here, but you find yourself rooting for their success regardless.

The action rarely slips out of third gear and the visuals are an unending array of imaginative devices, big explosions, loud thrumming noise from the Doof mobile, and Max’s careworn gaze. The cast makes the most of their meager lines, letting their physicality convey much of the story. 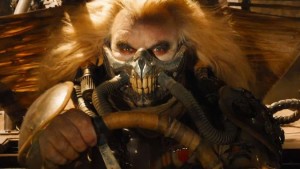 The flawless 1080p/AVC-encoded video transfer means you can enjoy the visuals from home and study the machinery or terrain with ease. Matched with the Dolby TrueHD 7.1 surround sound, the film sounds strong and you hear everything from the whisper wind-swept sand to the revving of an engine in the distance.

The combo pack comes with the Blu-ray, DVD<,and Digital HD along with a handful of extras that elaborate on the amazing world Miller has successfully revisited and we hope will bring us back for another look. The special features start with  Maximum Fury: Filming Fury Road (29:00); Fury on Four Wheels (23:00), a detailed look at the incredible war machines; The Road Warriors: Max and Furiosa (11:00), Hardy and Theron discuss their alter egos;  The Tools of the Wasteland (14:00), a look at the props and more on the production design; The Five Wives: So Shiny, So Chrome (11:00), Huntington-Whiteley, Keough, Kravitz, Lee, and Eaton fill us in on their characters, filming in the chill of Namibia, and how the rehearsal and skimpy outfits led to  a sisterly bond; Deleted Scenes (4:00), a mere three scenes; Crash & Smash (4:00), a selection of pre-production tests before CGI, which shows you how much was real.

I cannot recommend the film enough, whether you’ve seen the first three or not because there’s a lot to enjoy and think about.